11 replies to this topic 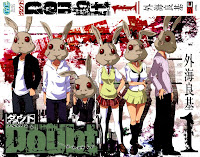 "There's a game going around Japan called 'Rabbit Doubt'. The premise of the game is that all of the players are rabbits in a colony, and one amongst them is randomly chosen to be a wolf that infiltrated the group of rabbits. Every round, the wolf kills off a rabbit, and every round, the group tries to figure out which of the rabbits is actually a wolf in disguise. Sometimes the kids who play this game decide to meet up in person, and Yuu, Mitsuki, Rei, Hajime, Eiji, and Haruka have done just that. Unfortunately, one of them has decided to take on the mantle of the wolf and has already killed once. Who is the wolf, and can they be stopped before everyone meets a very unpleasant end? "

Just finished this one today.

It was...interesting. I'm left with a few questions at the end (amongst which is "that's the end?!"), but alas...
Relatively short read, too. It's not horribly long, you could easily read the whole manga in a day no problem - I finished it in two days breaking up the reading into groups of 5 chapters (total of 30).

I'd recommend it to anyone who likes dark and mysterious stories with a little mind-f*ck in there keeping you guessing.

Don't forget, the edit and search buttons are your friend!

Yeah I got a few questions as well, but discussing it will kinda break the whole thing appart.


Well, we can discuss it, that's what spoiler tags were made for you know? xD
The biggest questions I have:
1)  So when we saw Rei's dead body hanging from the wall...she wasn't dead?  Was it a dummy, or how the heck did she do it?
2)  Apparently when Mitsuki is around Yuu, the hypnotism doesn't work...and so what, she snaped out of it and attacked Rei?  That's what seemed to have been implied...Again wondering how Rei was thus completely unharmed (and where she was the whole time).

Only other big thing is I want to know what happened at the end T_T  Did Mitsuki kill Yuu? Does he stop her?  Does she snap out of it b/c it's Yuu?

Don't forget, the edit and search buttons are your friend!

I loved this manga, read it about a year ago lol, i loved this series and im so glad the Sequel Manga has started this month (recommend you all read it, itrs called Judge)


This is the first time I see you post, and I already love you. The manga looks amazing and the start is just ****ing sick. Really, even I felt bad for the Aniki. I can understand if he was just your brother, but if the dude is taking care of you. You just don't pull that kind of shit.

dchaosblade - I got the same exact questions as you. Main one is Wheelchair girl body. I still can't figure it out. Hypnotism is my only bed, but it still doesn't make any sense on how puppet girl overpowered her. Naybe we can get some answers in judge or for at least to Wheelchair girl to make an apperance.


Its not the first time you have seen me post believe me, since i remember you from the Introduce youeself thread and i had a mini conversation with you about Claymore until Kid Wolf yelled at us both. But i havnt been active here in a long time so that will also be a reaosn you dont recognise me. I used to be quite active in the manga section lol

Regarding yours and DCs questions, i think those questions make thew manga awesome since im not much for everything getting explained to me, so leaving questions makes this sereis more awesome!

Oh yeah. I remember. You had a picture of a dude with glasses. Ashirogi from Bakuman right?

Rabbit Doubt was really great, I couldnt stop reading once I began.

And I woudlve never thought that it was Rei who did all this. I somehow knew that Mitsuki was the one killing, but I wouldnt have thought its because of Reis hypnotizsm.
But yes there are a lot of questions still to be answered, but I dont relly know if Judge is a sequel or a completely different story.
It has somethig from the SAW movies.
I wouldve like it more if they wouldnt have to wear the masks. And I suppose if they take it off the same things happens like what happened to the guy from Rabbitd Doubt.

[Admin note: Sig removed due to negative comments toward the community]


I think its a sequal to the franchise but thats about it.

Since Rei survived if i remember correctly so i suppose she could go out and recreate the game. But i dont really see much of a general reason for her to do so, and it would kind of make the seires a let down.

So it could bee a brand new thing, either made by someone on there own or by someone who had contact with Rei before she made 'her' game.

i say atsuya is the master mind. because he dead, so he the least suspisous u_u.

Just finished reading this. It was okay. Kinda short. Would suggest it to anyone who into this genera.

I kind of Caught onto the end around chapter 17, But that really could be said about... anything we read.

May you love one forever.