), and riding the road of wings xD
must read! download at stoptazmo.com

i told u it's awesome! and stupid fangirl strikes again, stealing my second Akito picture....(lianne and Isabel)

Air Gear is that good eh.. Will check it out.. I've been meaning to read GTO but maybe I should watch the anime first.. x.x

well, for those of you curious-

summary:
Itsuki is quite the rebel. He fights nonstop with other gangs and as known as the strongest fighter in the area. After another one of his fights, he returns home with his childhood friends and roommate, Ringo. That's when we figure out he rooms with Ringo and her three sisters since they're all orphans. Mikan is the tomboyish one with a violent attitude, Shiraume is the youngest and somewhat uncaring, and Ringo is the only normal one. Sounds like some sort of a harem anime? That's what i thought, but then the story took a turn. The gang he challenged earlier called upon an air gear gang FYI airgear is a rollerblade like device that allows you to skate up walls, in midair ect. Well anyway, he ends up getting beat to a pulp and humiliated, and gets all depressed. The three girls, intent to take revenge for thier friend, decide to start teaching Itsuki the art of air gear. This would have been laughable, of course, if they weren't....well, that's a secret.

some things that caught my eye when reading
<really spoilers>
Spoiler
there's a whole nother community you can visit at night in the city
Completely different people rule the city
there's a set of laws exclusively for air gear, and there are crazy people that enforce them
there's tournaments, air gear fighting and stuff
even old man can skate!
<chapter 1a attached>

goodies:
My favorite character, right here ^.^ he's a certified psycho ^.^
anyone feel free to use this siggy and avvy ^^just write air gear below the banner so ppl can check out the manga ^.^

ZOMG, u are a Agito fan too? rock on~

agito is the best!! it's akito and agito,right? I like both sides of him, but yes i adore him (if you look at the reel, most of the piccies are him, oh how biased i am) 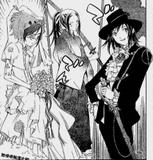 whoa.....although it seems dull, i'm fully into it.

<--how long have I had this? Time for a change!

that's great to hear! *big smile* those are awsome piccies mkk!! *saves all to hard drive* i <3 agito ^.^ Does he really dress up in a wedding dress? and the chibi piccies are so cute! i have to bannerize them sometime ^^

, stop gettin em excited mkK
too bad i cant read chinese.. onli on chpt 32.. that credits pic at the end of that chpt... xD

hehe *smiles* do you know where the original scanslation site is?

i've been getting all mine from stoptazmo lol ^^

you can always email the ppl who translate it xD
do u read chinese? mkK wanna translate for us???

ah, wait, so there's no jap-eng team? i'm quite sure i've been reading english scanslations, but does it go jap-chinese-english?


how can u not be sure wether or not ur reading english..? (lol jus jk ^^)
im guessing it does cuz most of the sites i go to, to find air gear are chinese raw or scanlated

who's your favorite character, smilelolz?

i havent read past 32, but he was pretty cool when he brought the gang around to help Ikki.
mkK can u fix that link for me? i bet u know wat pick that is.. the MJ creds.