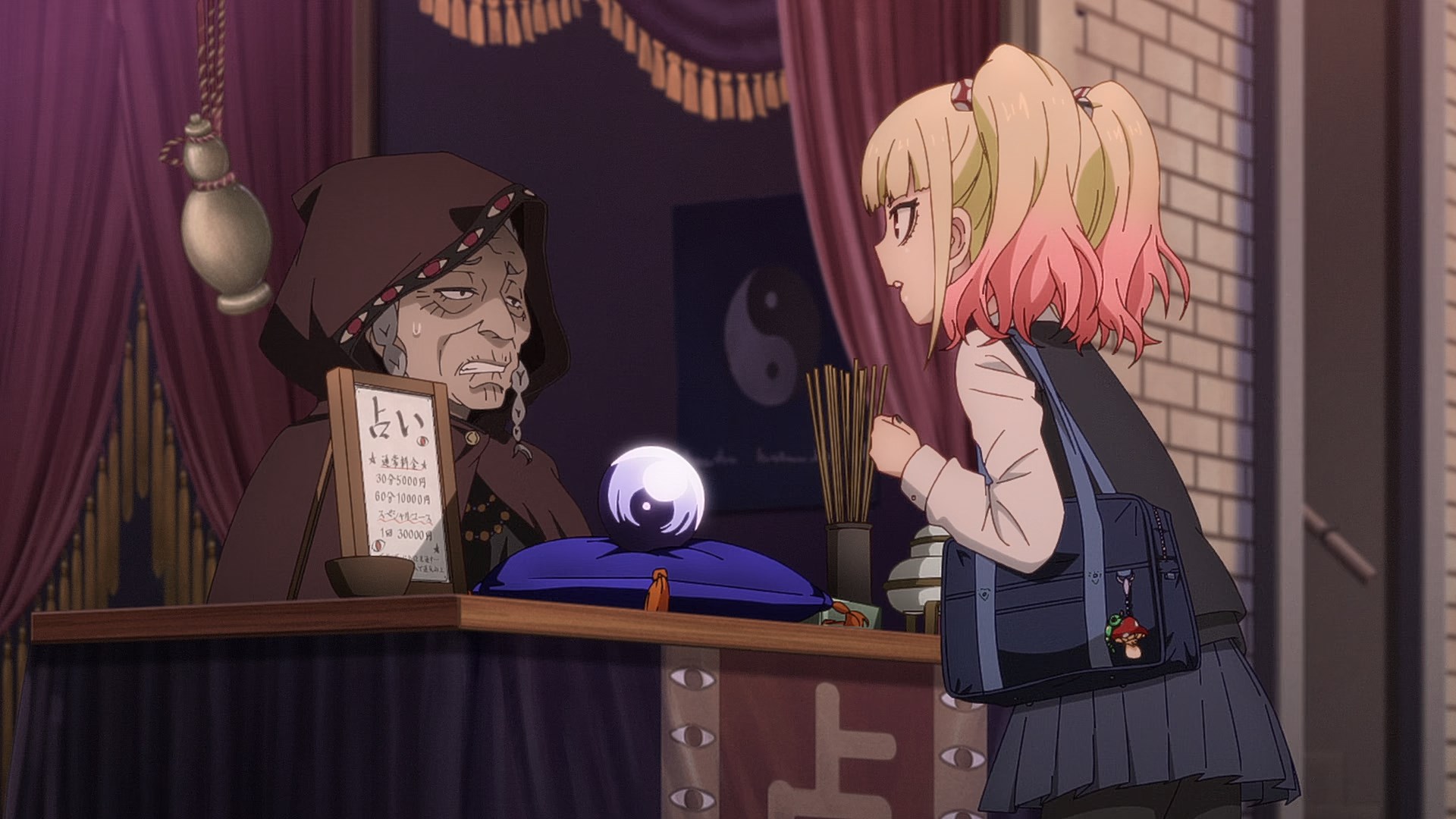 We return to the Fortune and Exorcism store and it would seem that our girl of mystery is badgering the old lady to make her apprentice. Despite the girls desperate pleas her wishes are not granted as the old hag refuses to deal with young kids seeing as they have no money. Pitying the girl the shopkeeper offers to give some old beads to shake the nuisance off but this gift is misunderstood to be a confirmation of her becoming a newly minted apprentice! 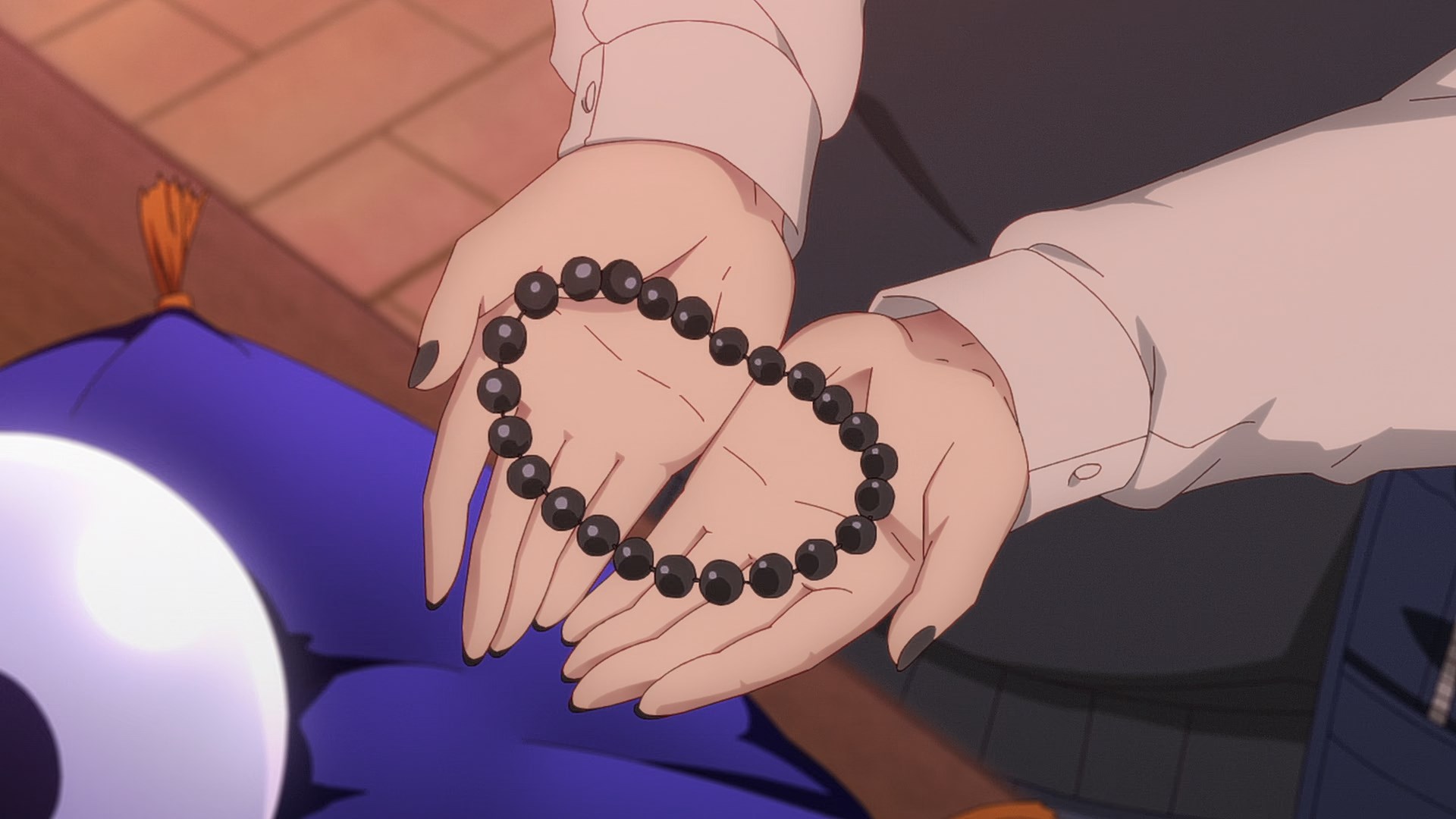 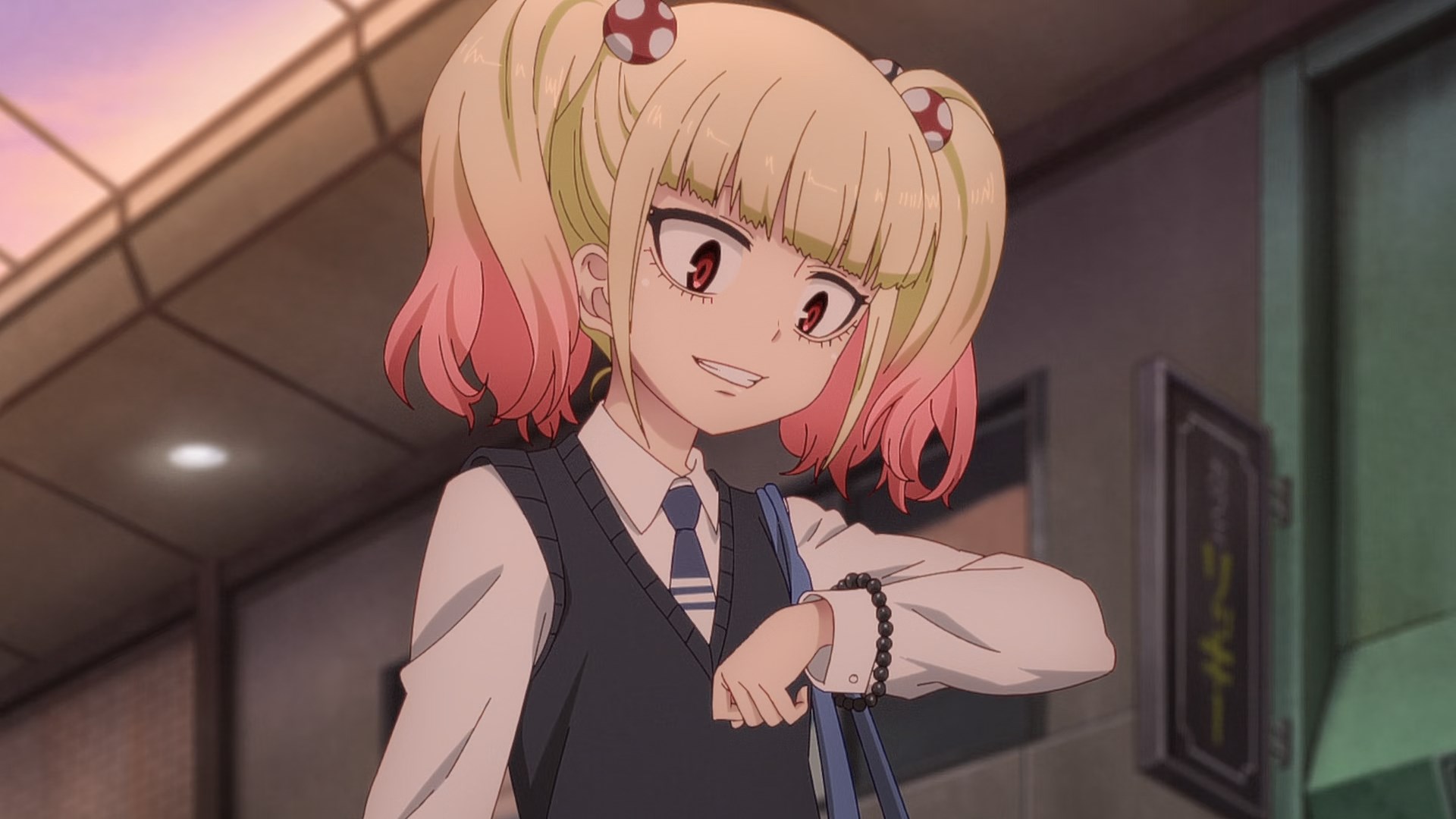 Walking away we finally get a name to the face and her name is Yulia Niguredo. Like our Miko-chan she has the power to see ghosts and other apparitions and it would seem her long-term desire has been to exorcise those pesky little spirits. Carrying the beads on her hand it is not long until she gets lost in her dreams and can only imagine being a girl that will be admired by all.

Those dreams all come out in the smoke when she later finds the shop is shuttered for good! Gasping at the terrible news Yulia is thrown a life line when a nearby passer-by suggests that the ladies two last customers possessed a great spiritual connection. She can’t believe the news as she seems to think these are just two ordinary girls who know no better and when Hana says the beads she got were rubbish Yulia boo hoos the whole comment. However when she witnesses Miko make Hana avoid the latest spirit she begins to cast doubt on her earlier assumption. 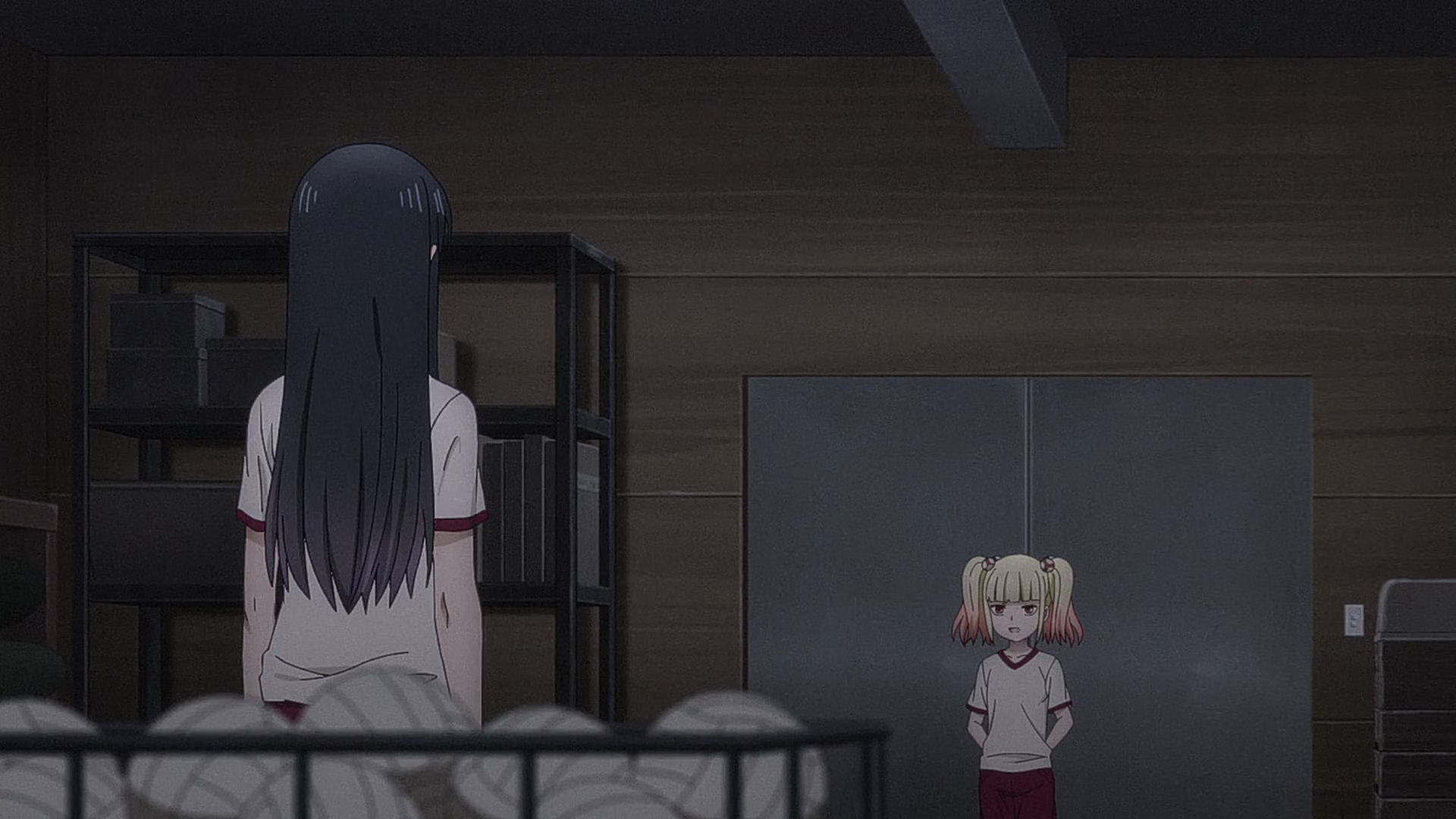 The next day Yulia tentatively introduces herself to Miko and asks they go into a storage room together to “clean up”. Here Yulia lays out her cards by saying she is aware that Miko can see stuff and is amazed at her ability to avoid stuff so nonchalantly. She tries to get Miko onside by saying she can understand her hesitation in coming out as she too has faced ridicule for saying she can see spirits.

However when Miko continues to act coy in the face of the wee spirits Yulia gets flustered and even sees this behaviour as a means of making her look silly. It is just at that moment an even bigger spirit shows itself and Miko is scared sh*tless! Fearing the spirit may act out if it figures she can see it she stands like a rabbit on headlights. There is a tense face off but when Yulia’s beads break Miko loses her marbles and dives for Yulia putting her in a headlock until she passes out. Oh wow!

When Yulia comes to in the nurse’s office Miko is waiting and tries to comfort her by suggesting that she pretend not to see spirits, that way she won’t land herself in further danger. These words of comfort however are taken completely the wrong way and are seen as a thinly veiled threat that something more serious will happen if she dares to pull of a similar stunt in the future. Yulia is traumatised! 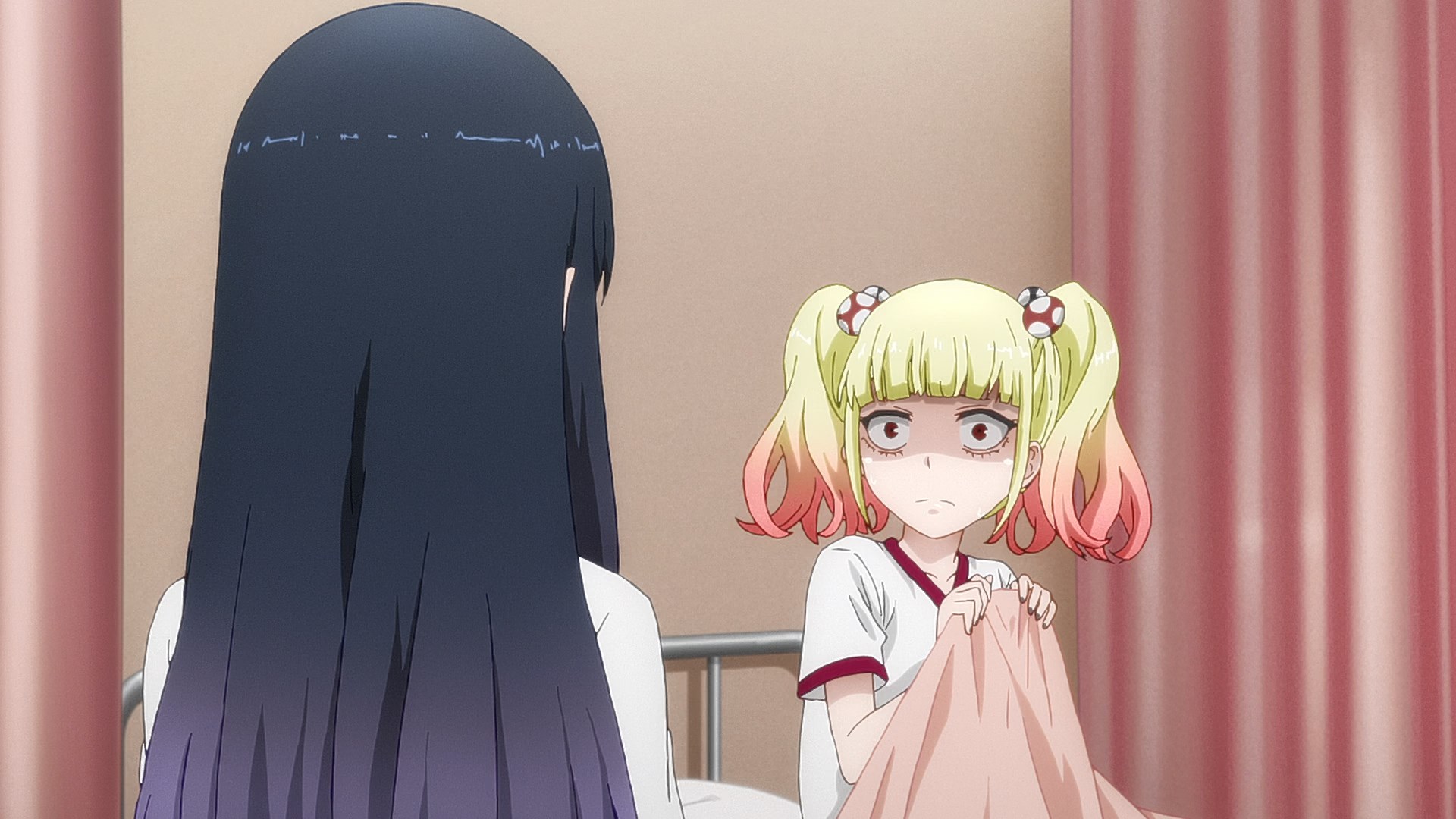 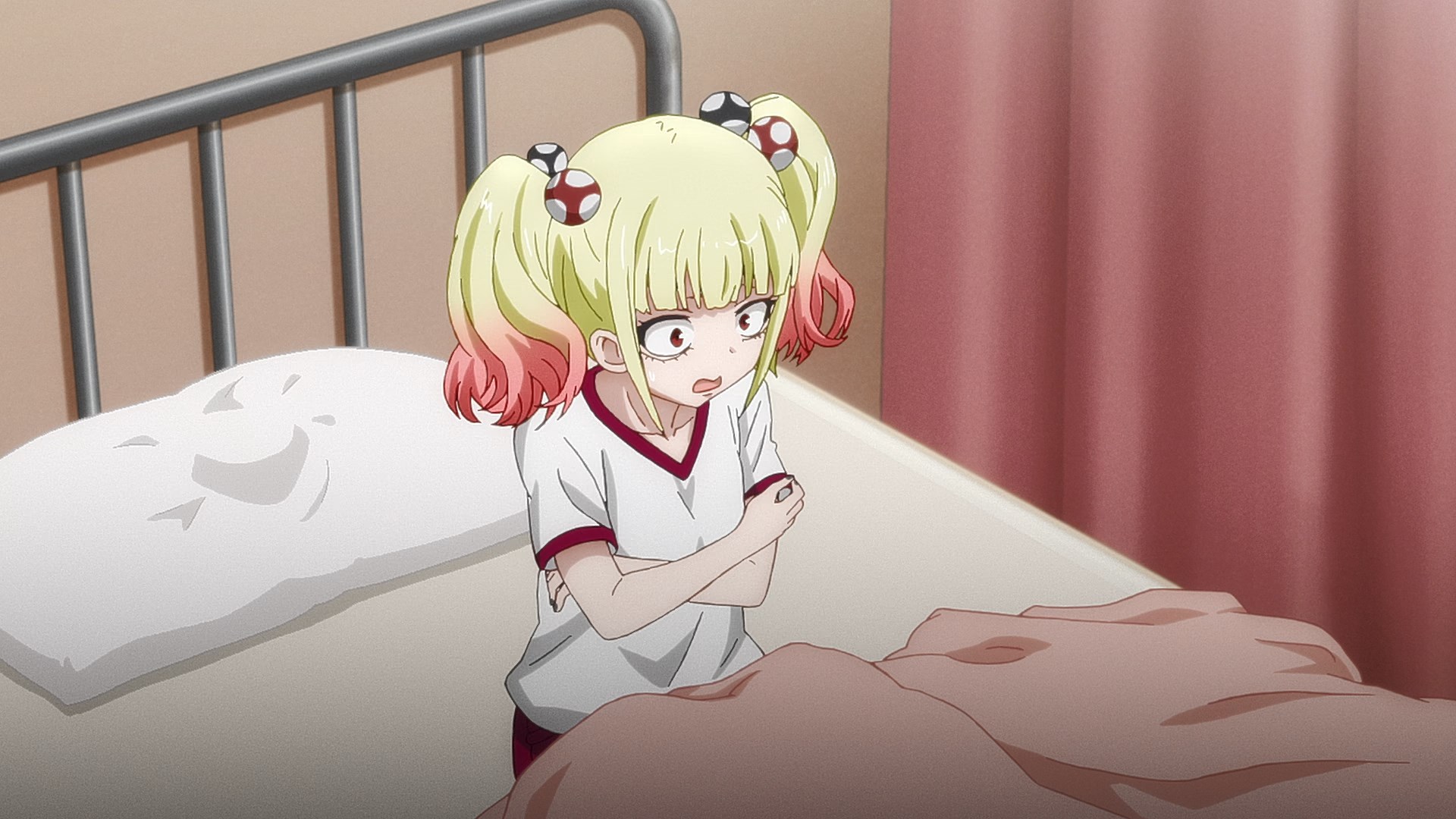 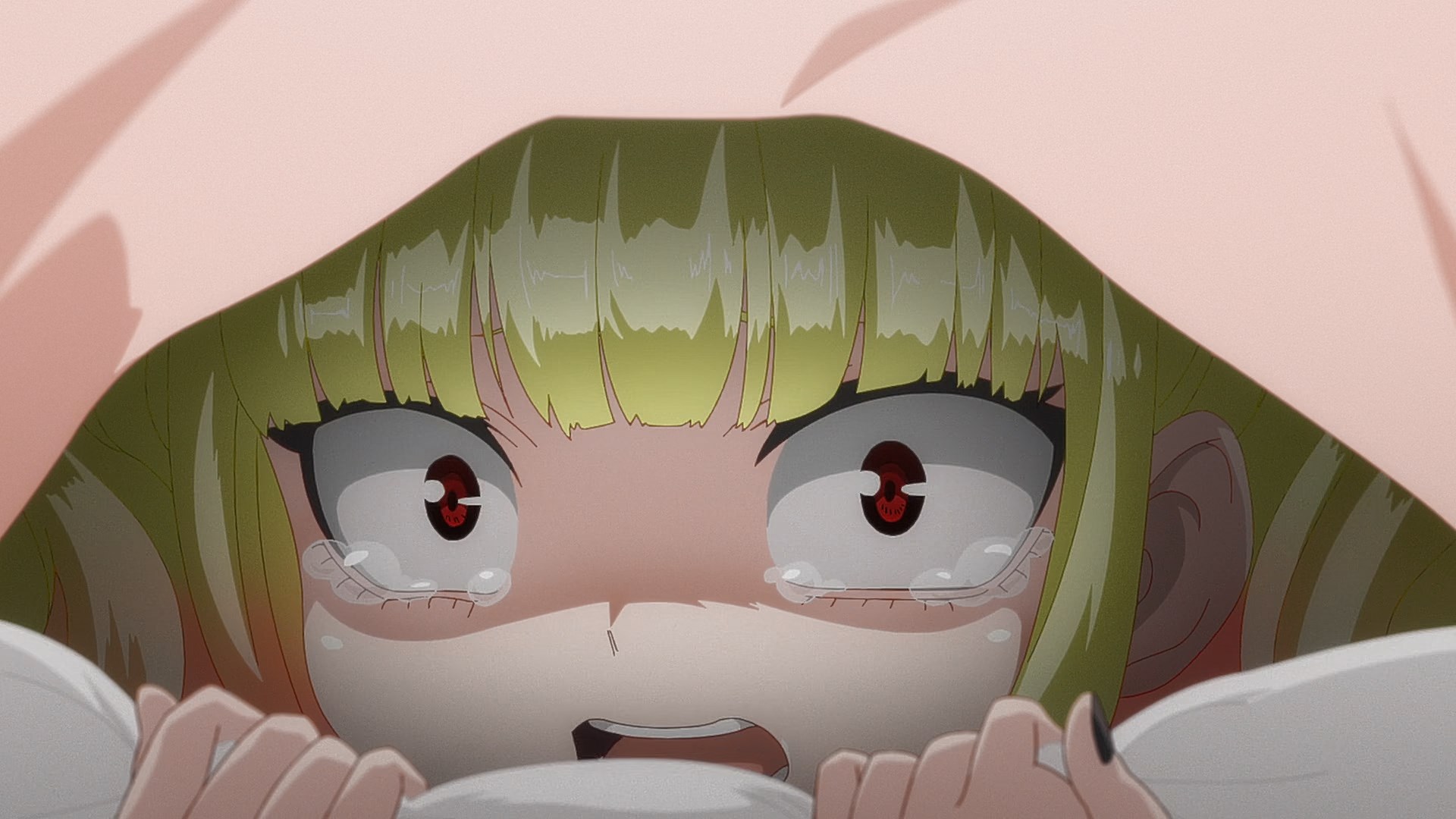 Miko gets no breaks and there is more drama when she attempts to get back home. When she walks down a flight of stairs she is confronted with yet another spirit but unlike before, this one grasps her arm! Doing a take two it turns out this is just an old lady. Troubled from her inability to separate ghost from real person she carries the lady home and is thanked for her troubles by the daughter. Just as she is about to go back home however… Another ghost appears uttering the words four, six three, one repeatedly. She almost freaks out and attempts a run for it only for the granny to hold her with unnatural force. Peering into her phone the granny asks what it is for and Miko decides to pull the four digits she heard so she can see. 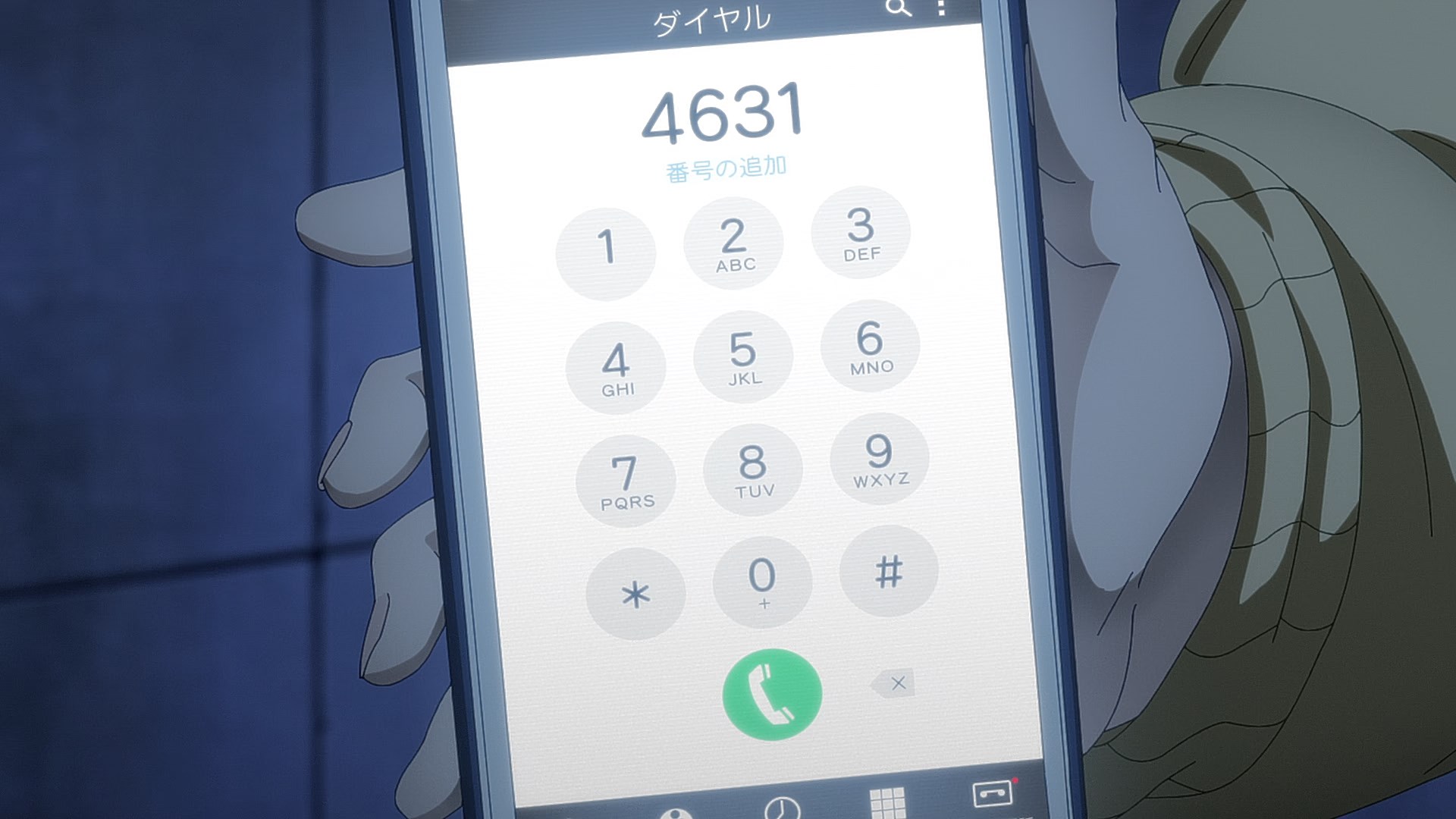 Just like that her behaviour changes as she makes a beeline for the safe in the house. Using the digits shown on the phone she unlocks the safe and takes out the present that was given to her by her late husband. Miko looks on and it seems like the spirit is almost thanking Miko for her actions. Sweet.

Hana and Miko decide to pay the cake store a visit and come across something that looks pretty tasty! 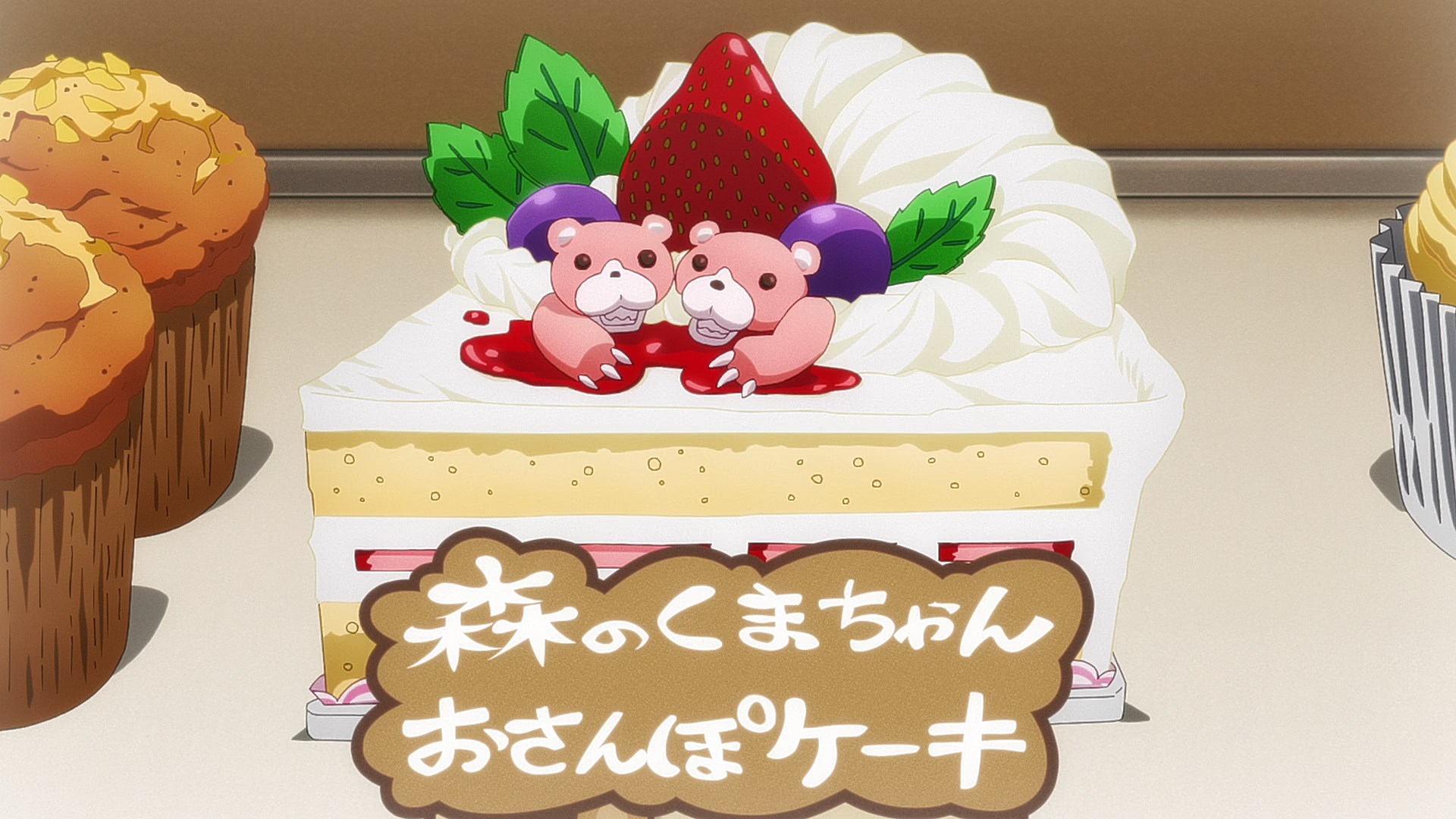 Miko is not really feeling it and when the staff member tries to make a hard sale by saying it is the last slice Miko decides to opt for another delight. 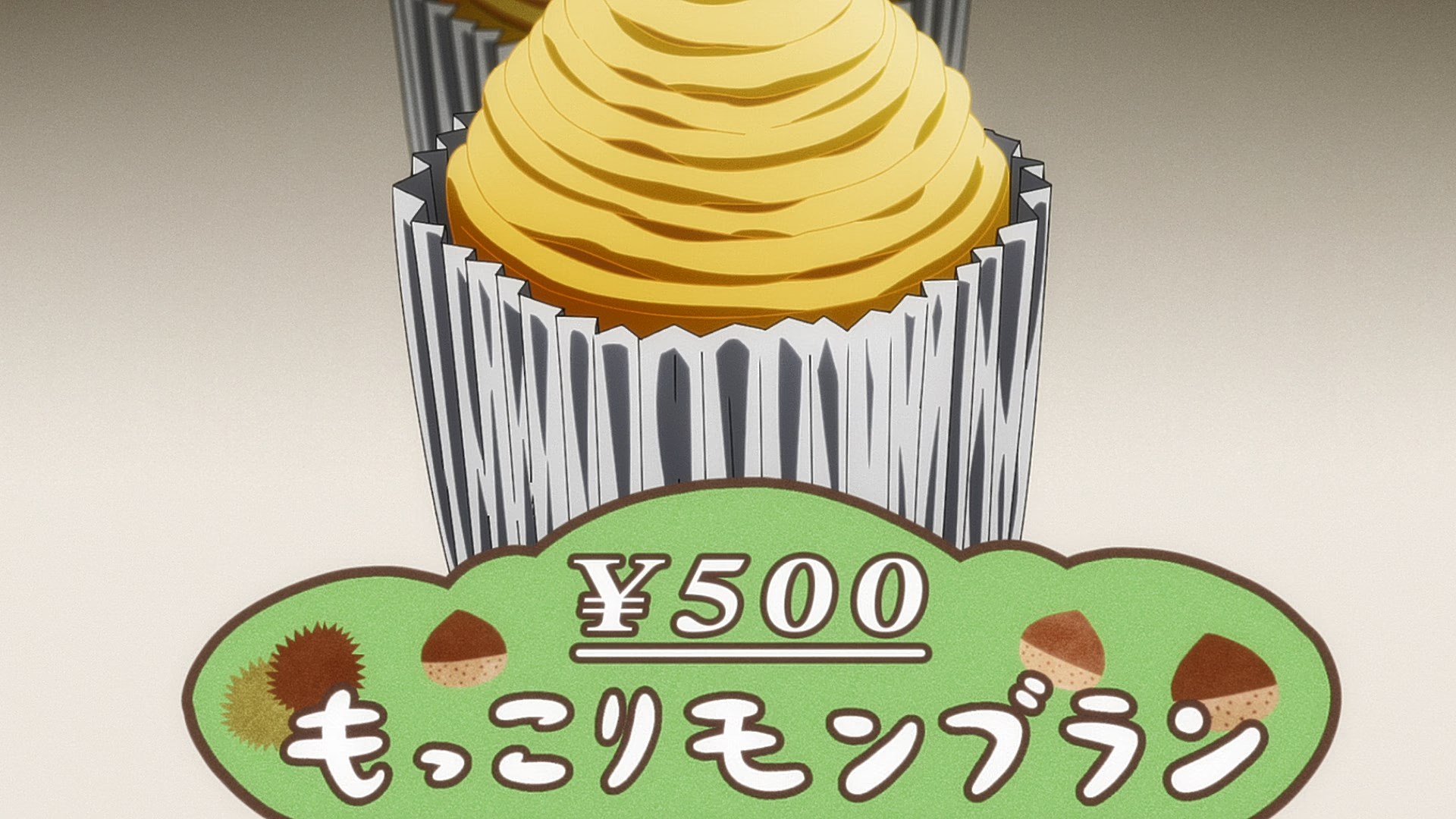 Walking home soon Miko stops on her tracks when she sees yet another spirit and manages, with her usual finesse to direct Hana away from danger. Are these appearances becoming more frequent? Miko wakes up with a start the next day and is still troubled over the big spirit seen the other and just to press the point further when Hana wakes up, she notices her clock has stopped yet again. Whatever can this mean? Hana decides to have a beautiful pancake for breakfast. The viewers are also treated to a little breakfast delight too. 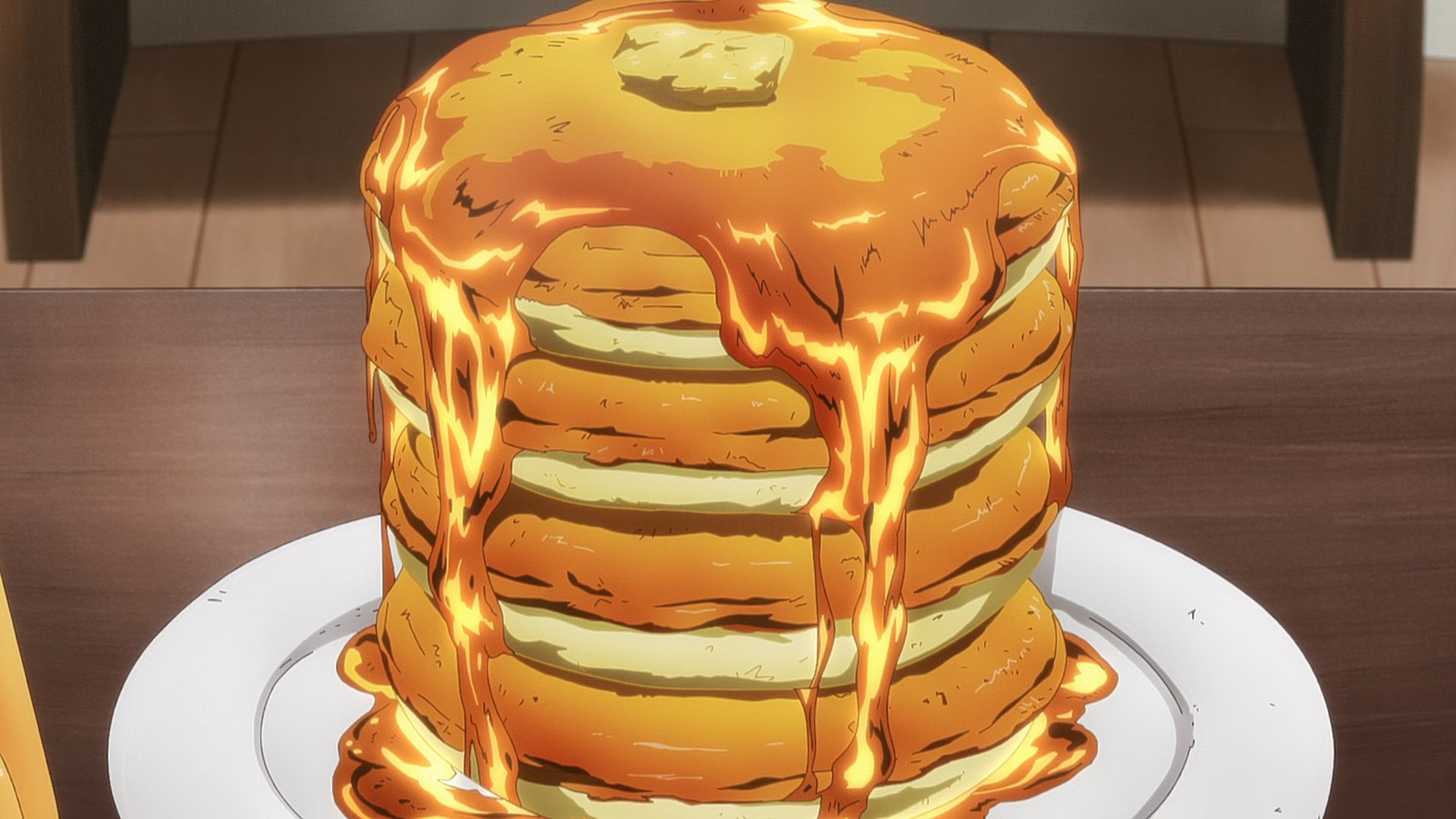 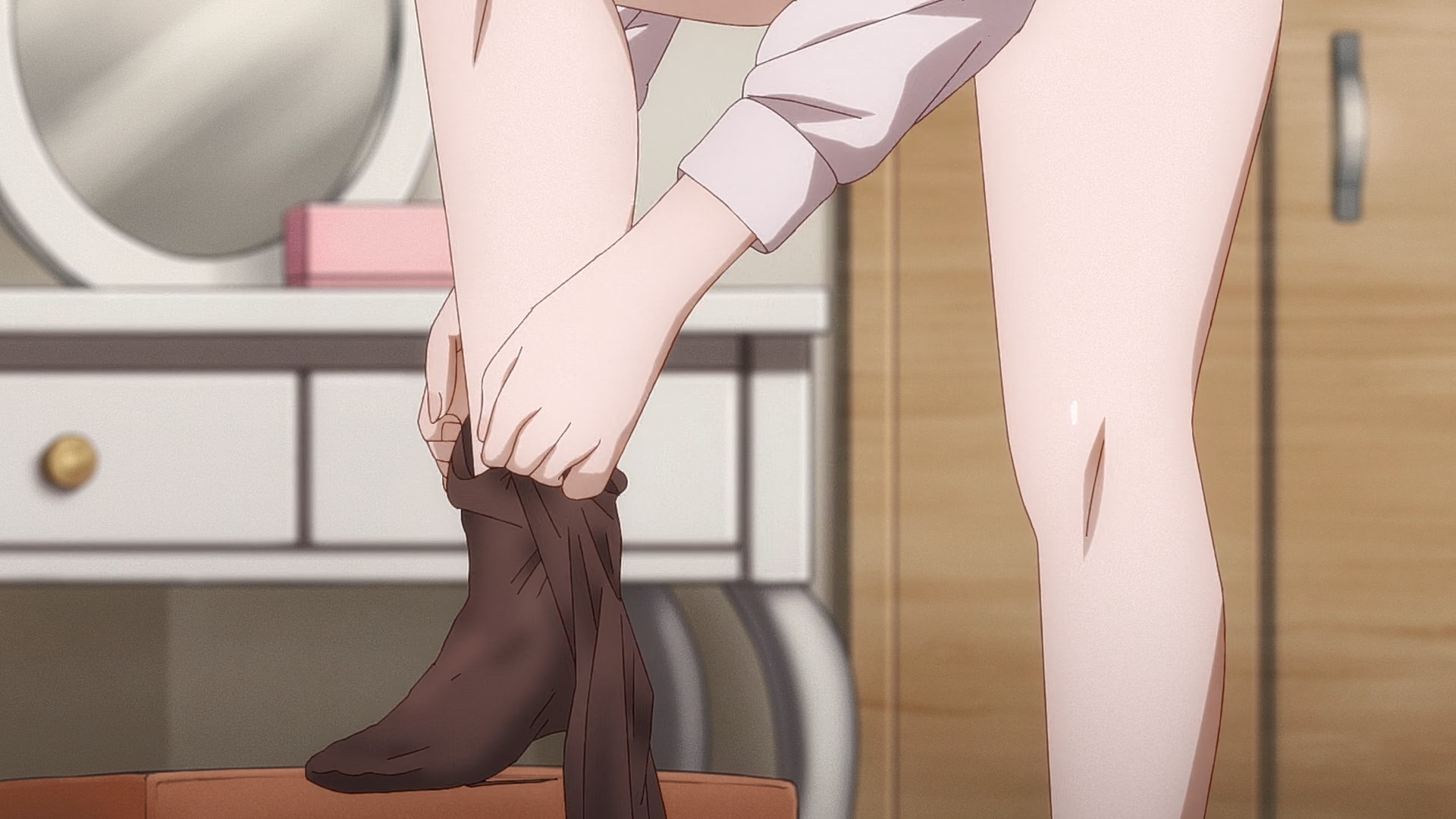 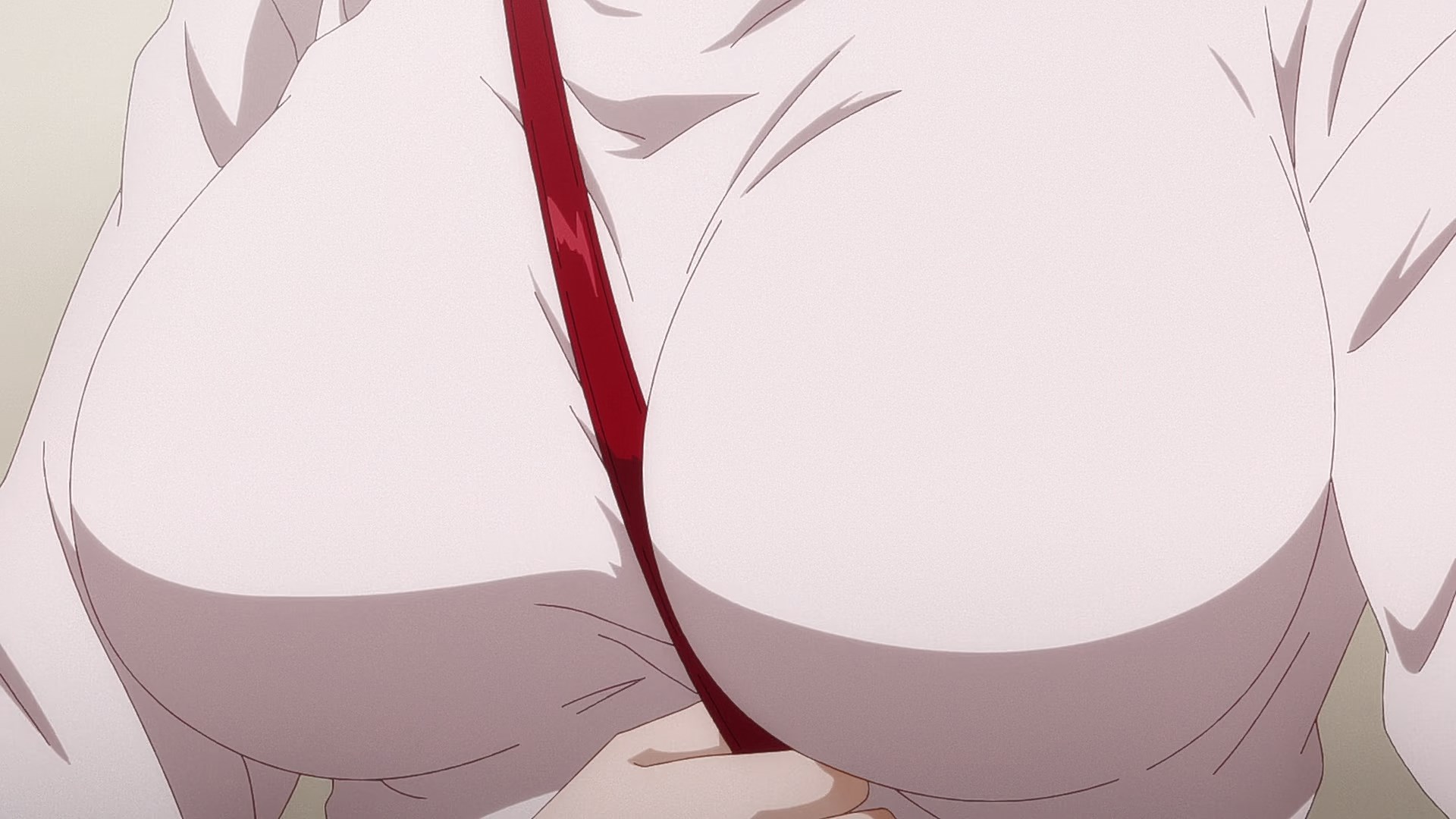 Strange things continue to happen as the lights flicker and then go out. When Hana leaves her house the friendly neighbourhood dog seems pretty grouchy barking incessantly and ignores all commands to sit. Is the dog sensing some ghastly spirits nearby?

Oblivious to otherworldly figures Hana continues to walk on. It would seem a bunch of spirits are following her like a moth to a flame as Hana appears, in their perspective, to be emanating some crazy amounts of spiritual lights. What’s more when a larger spirit drops a wee spirit onto Hana it burns. Is the girl some kind of oven now? 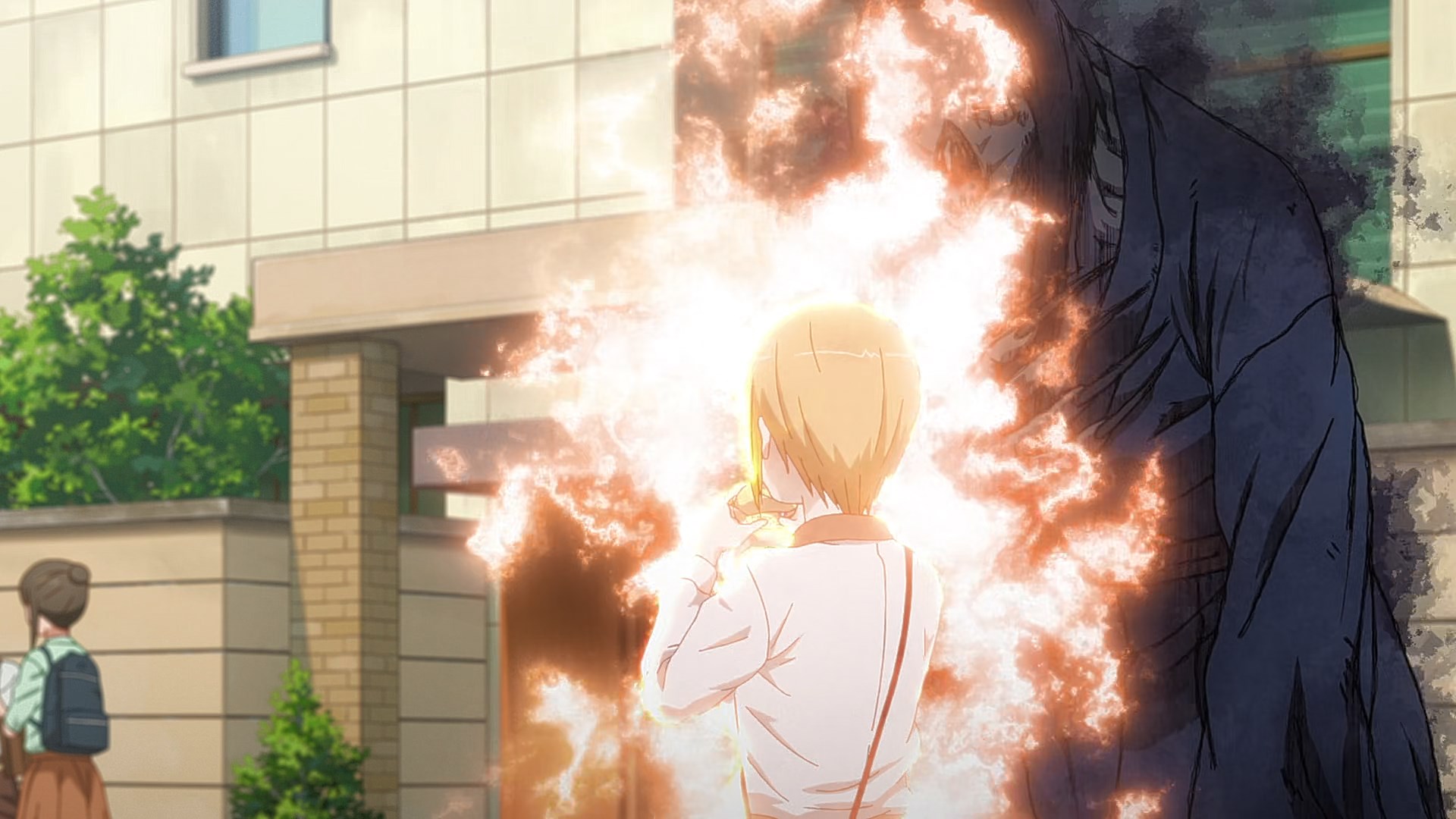 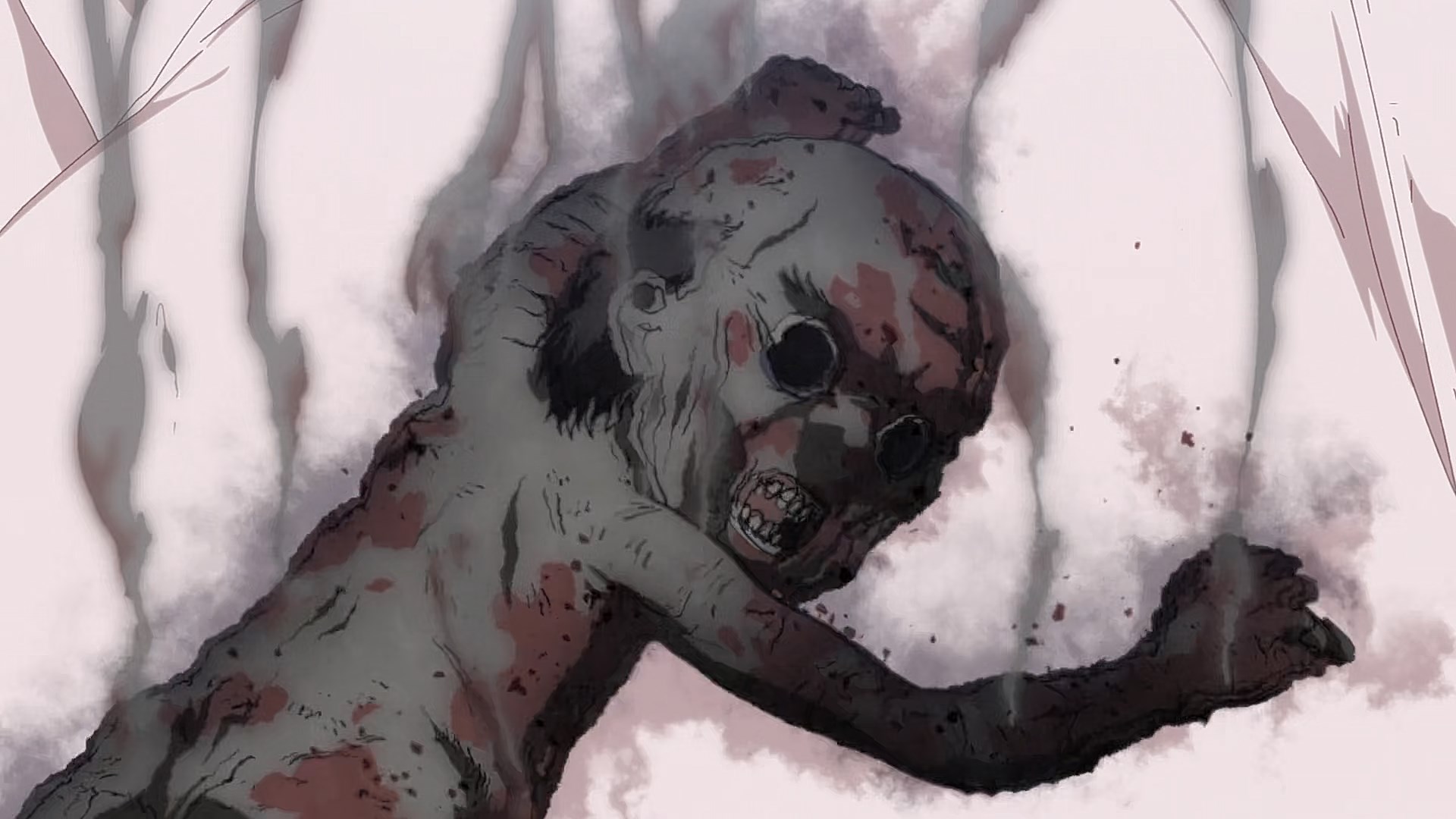 Walking further she spots a boy sobbing over his lost dog Chiko. Hana stops and decides against her senses to help the lad by going into some spooky abandoned building. The ghosts continue their pursuit and the big spirit decides on helping himself to another hot snack by throwing another little fellow on “the oven”. Going deeper and deeper into the building the whole place seems to carry an increasingly sinister vibe. Hana finally hits a dead end and with so many spirits lurking around you wonder what will happen. She stumbles on what looks like a body bag but when removing the sheet finds Chiko inside! The dog, a surprisingly big dog is returned save and sound! 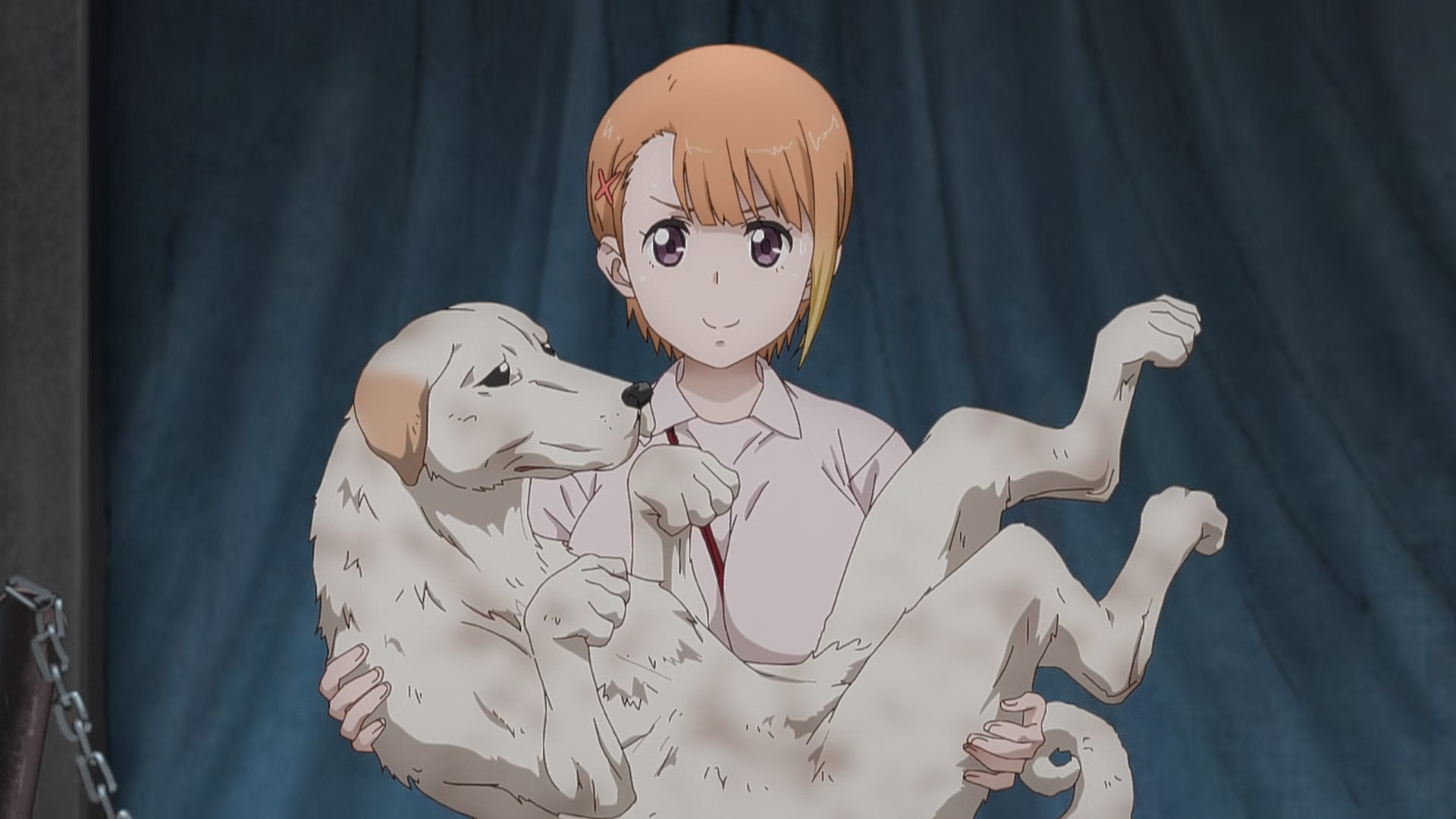 She is thanked for her troubles but when meeting up with Miko seems to have carried her troubles with her. Miko can only gape at what the Hana brought home this time! 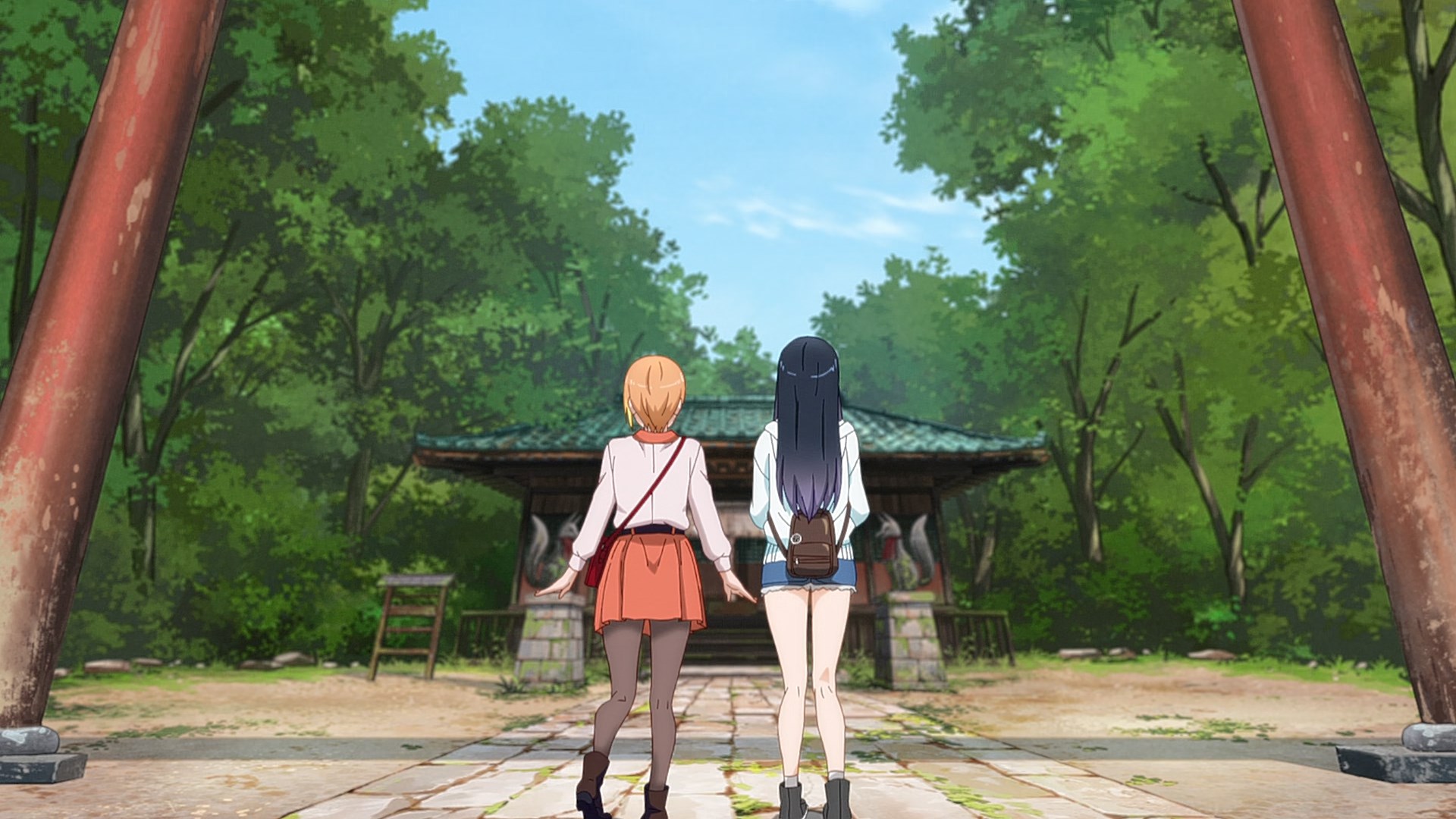 The next day the two girls decide to visit a spiritual shrine. Hana initially feels disappointed but Miko insists they take out the sights this place has to offer. The girls both decide to throw some money into the shrine and the differences in wishes is amusing. Hana simply wishes to have more sweets to devour while Miko wishes for the spirit that is haunting Hana to go away. Her wishes seem to be in vain however as instead of the spirit disappearing it is accompanied by an extra two ghost shrine maidens.

Just as Miko walks away in despair the shrine maiden cuts of an arm of the evil spirit. Miko tries her best to hide her startled expression but Hana makes it as hard as possible by walking straight into dangers way! Not only that but she decides to linger there sprouting nonsense about what movie to watch next. It is all too much for Miko-chan who is reduced to staring blankly with her mind completely gone! Miko simply says she hasn’t seen anything. Not sure if she is trying to convince Hana or herself there. In any case Hana misunderstands completely thinking Miko has simply not watched any movies she has offered to see!

A huge epic fight is taking place this time with Hana going off about looking for cute bunnies which is in total contrast to the mood of the scene. It looks like the bad spirit is getting the upper hand here but then something mad happens and I am not really sure if it is a good thing or not. Miko’s is none the wiser as she hasn’t got a clue whether the spirits lives on or she has unleashed some kind of god instead! Things only get spookier when the spirits start making some strange noises. Are they talking to her or amongst themselves? Just to give Miko the heebbie-jeebies the big spirit says three times before disappearing… 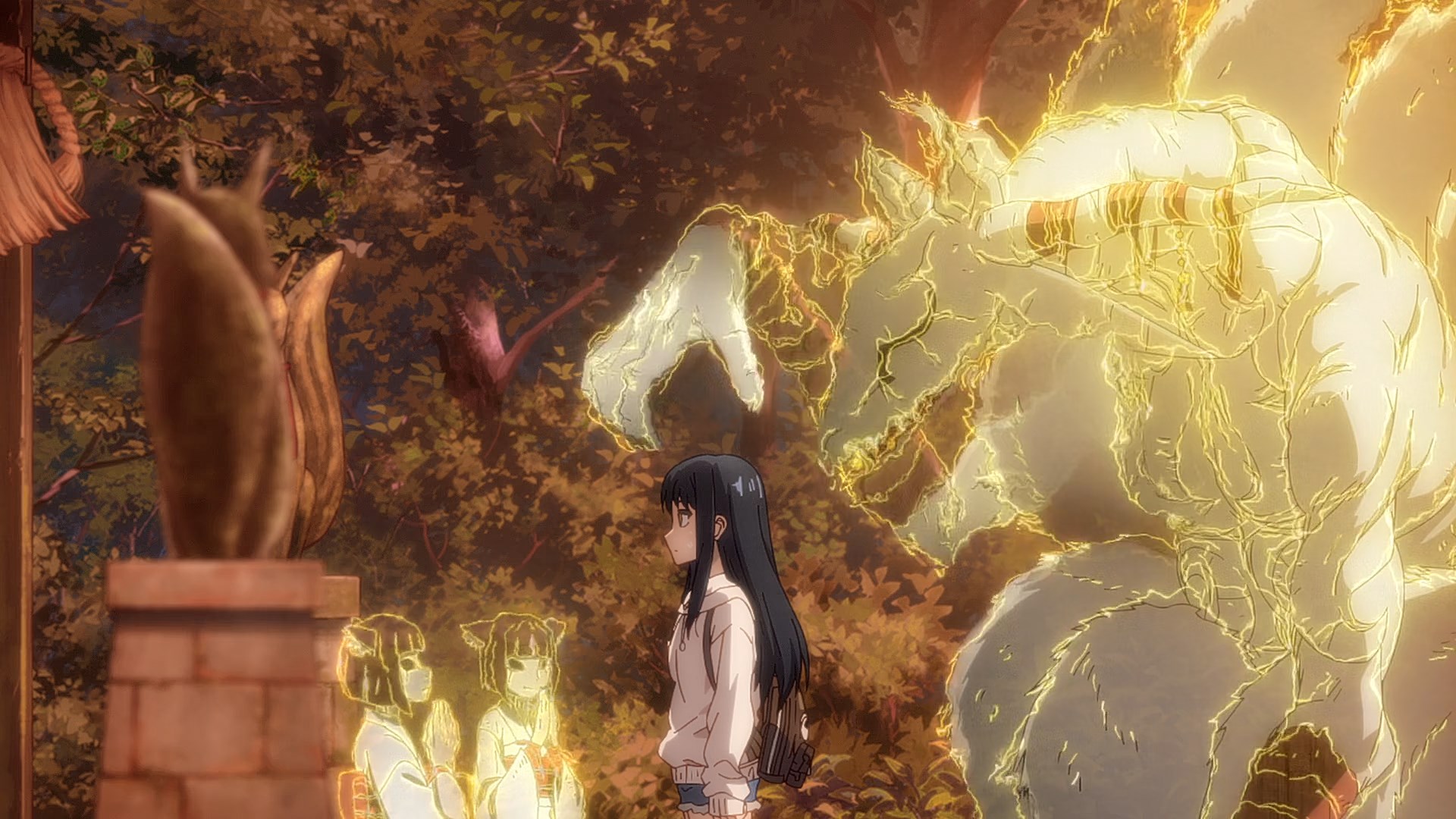