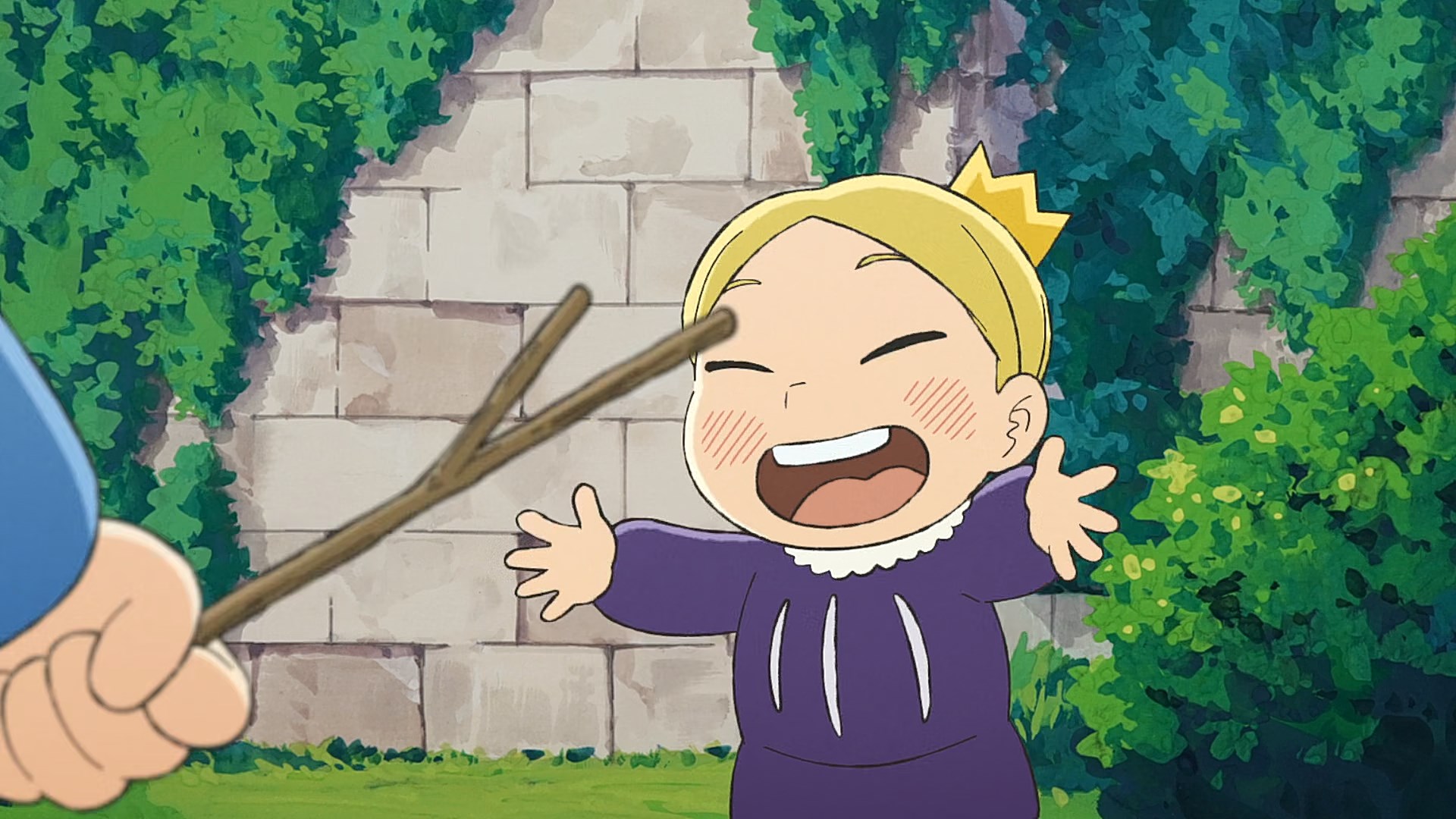 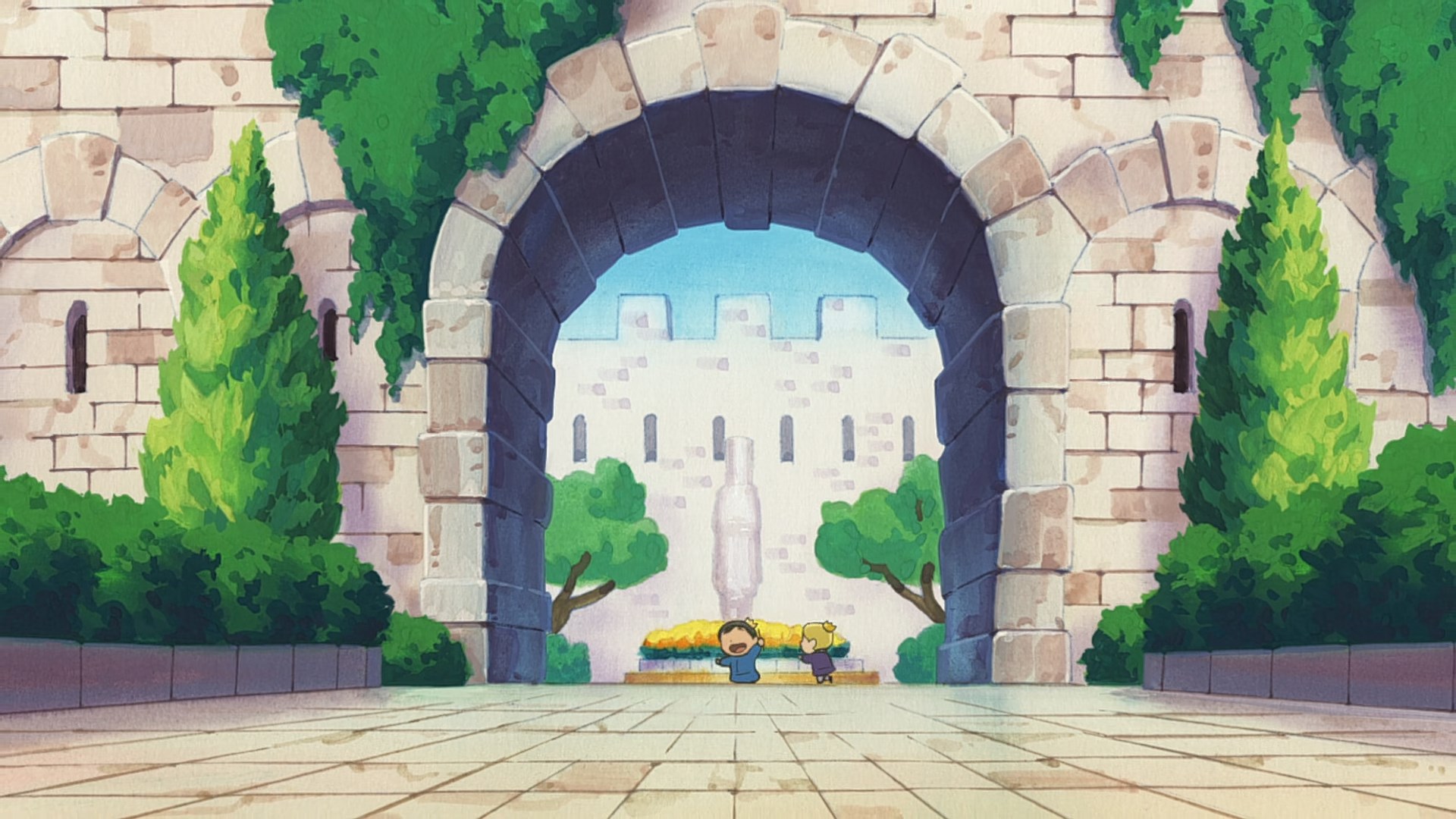 The episode starts of with a flashback of Daida’s childhood showing his relationship with Boijj and his parents. Whilst he was initially close to his elder brother, Bojji’s limitations soon become obvious. It is this apparent weakness that led to Hiling encouraging Daida to act as his protector. This type of encouragement naturally bolsters his ego and with the mirror complementing his abilities at every opportunity it is not long before Daida sees himself as not only being superior to Bojji but being the natural successor to the throne.

Over time Daida grows increasingly weary at the amount of training that Bojji receives believing it is a pointless exercise considering his impairments. He tries to get confirmation from Bebin but only gets silence instead. Pressed, Bebin takes Daida on a tour of the city spotting a man with similar disabilities to Bojji. 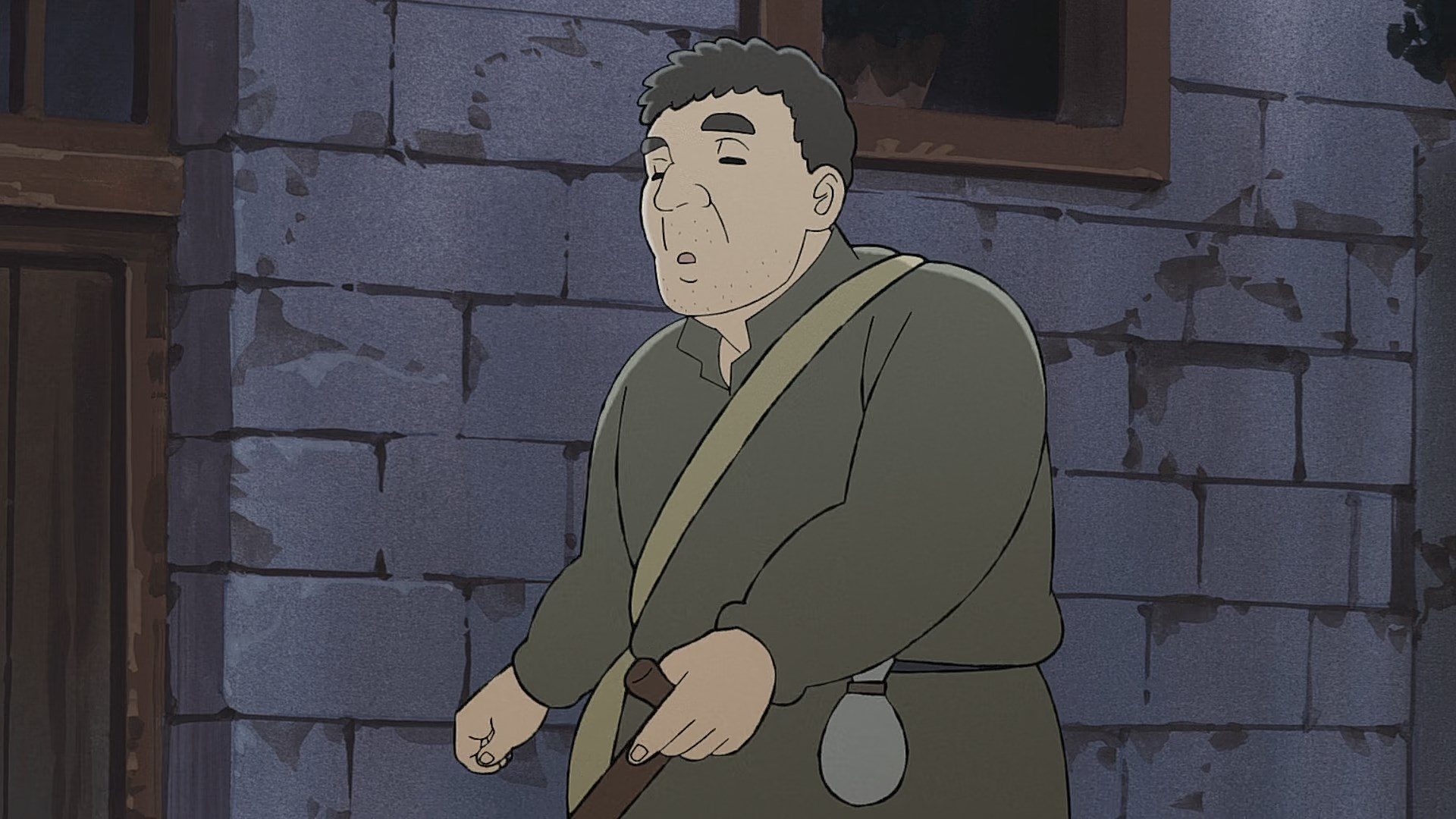 Bebin pops the question of what Daida would do if he was blind and deaf. He answers, without thinking, that dying on the spot is the best course of action. Bebin then highlights that the will to live from the man in front is stronger than Daida and he must find greater resolve. Daida is dumbfounded but Bebin presses his point further saying that this man’s lifestyle is only made possible because the city has a strong King in Bosse. Daida understands Bebin’s insinuation and is visibly frustrated at his shortcomings. 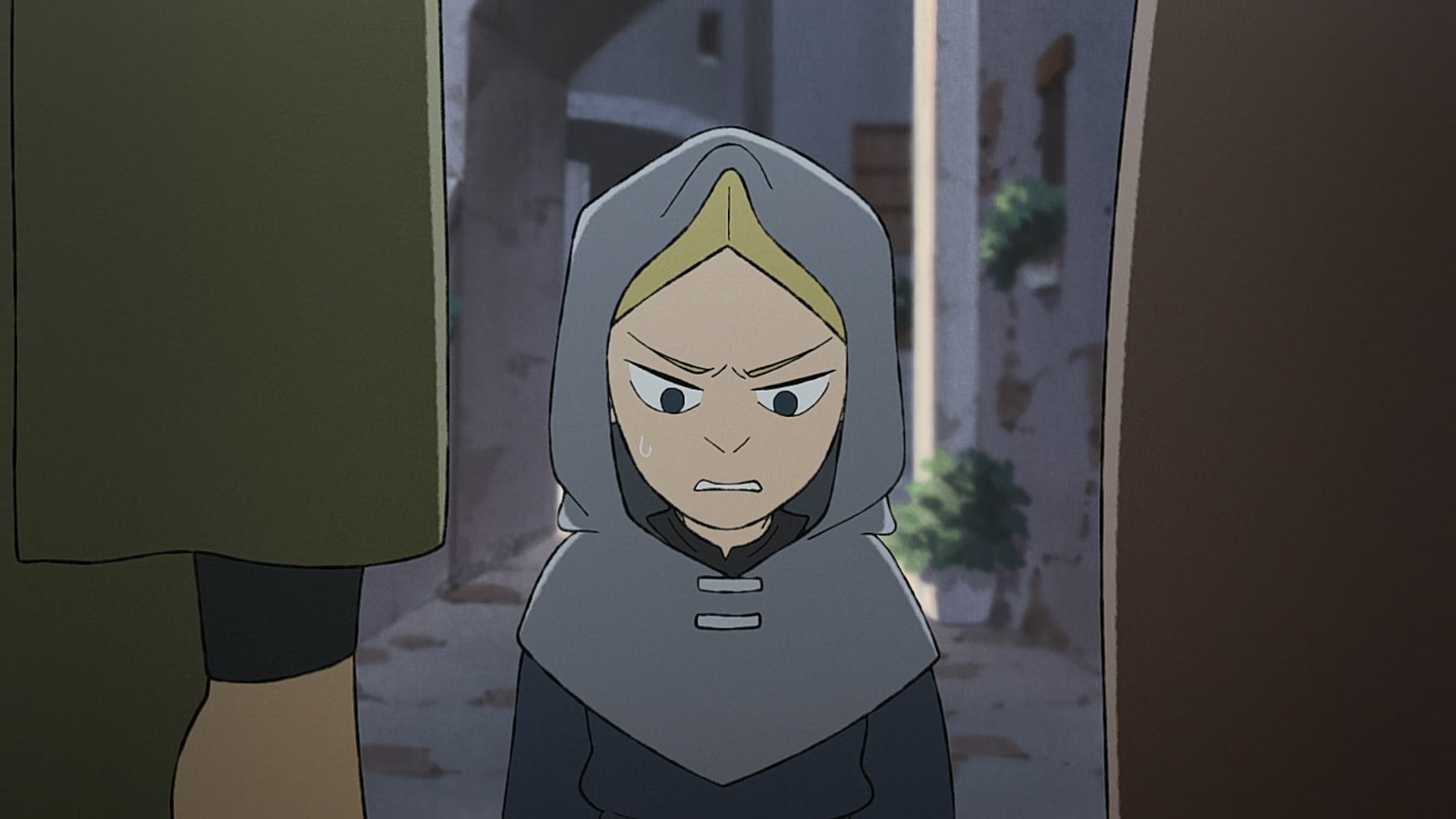 The flashback ends but what comes quite baffling. He sees a seemingly young girl get accused of various heinous crimes from a mob of people. She denies being responsible for anything and it would, on surface, to appear she is being bullied and the girl makes a run for it. She drops her masks and Daida, feeling sorry for her plight, decides to return her mask but is horrified with what he sees. With the girl unmasked he sees only a monster and all his previous sympathy disappears in an instant and he, like the mob, sees her as a monster that deserves no sympathy and mercy. His moment of rage however is fleeting for the crowd reveal their true nature and Daida’s scorn is once more directed at them. 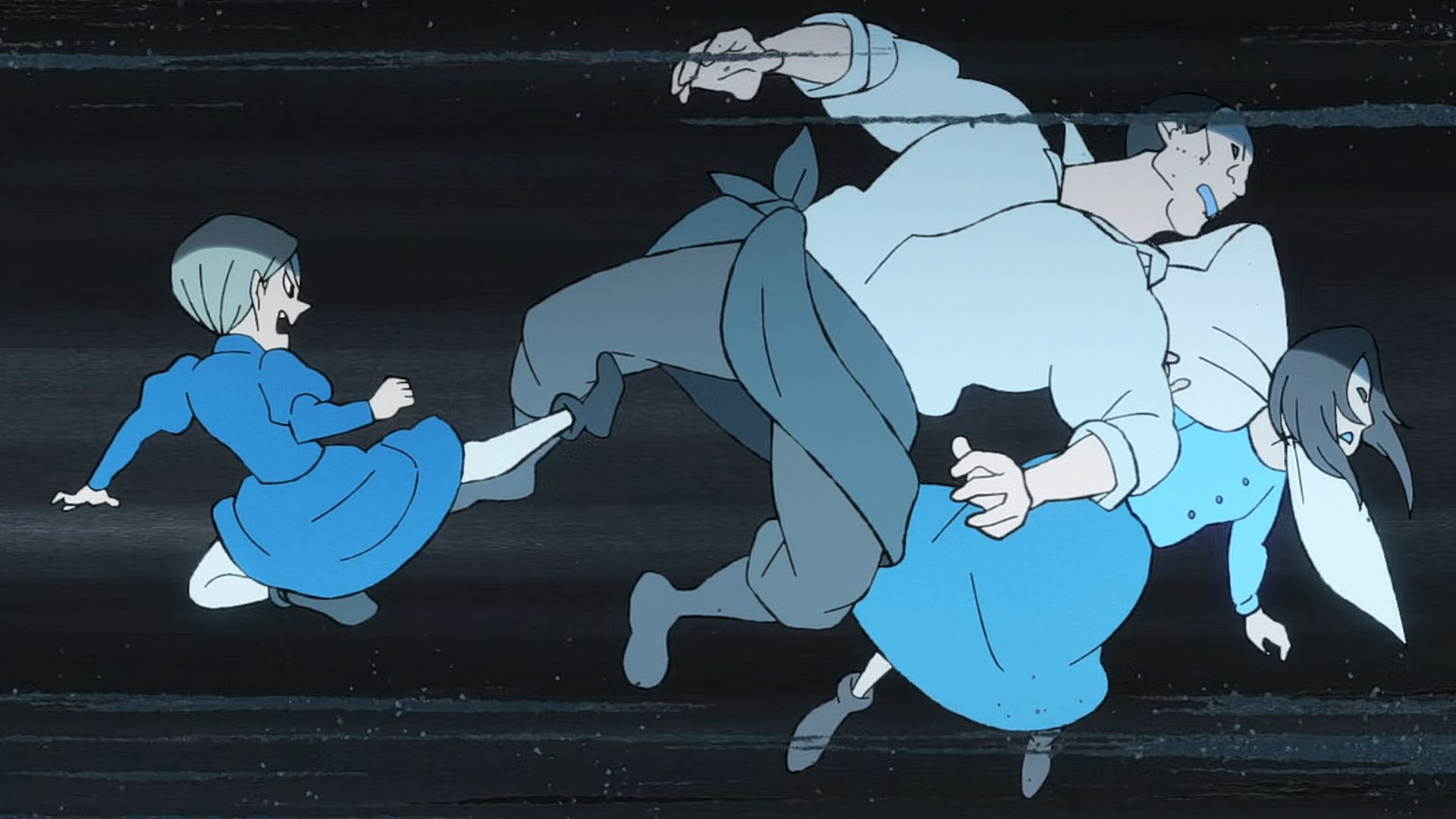 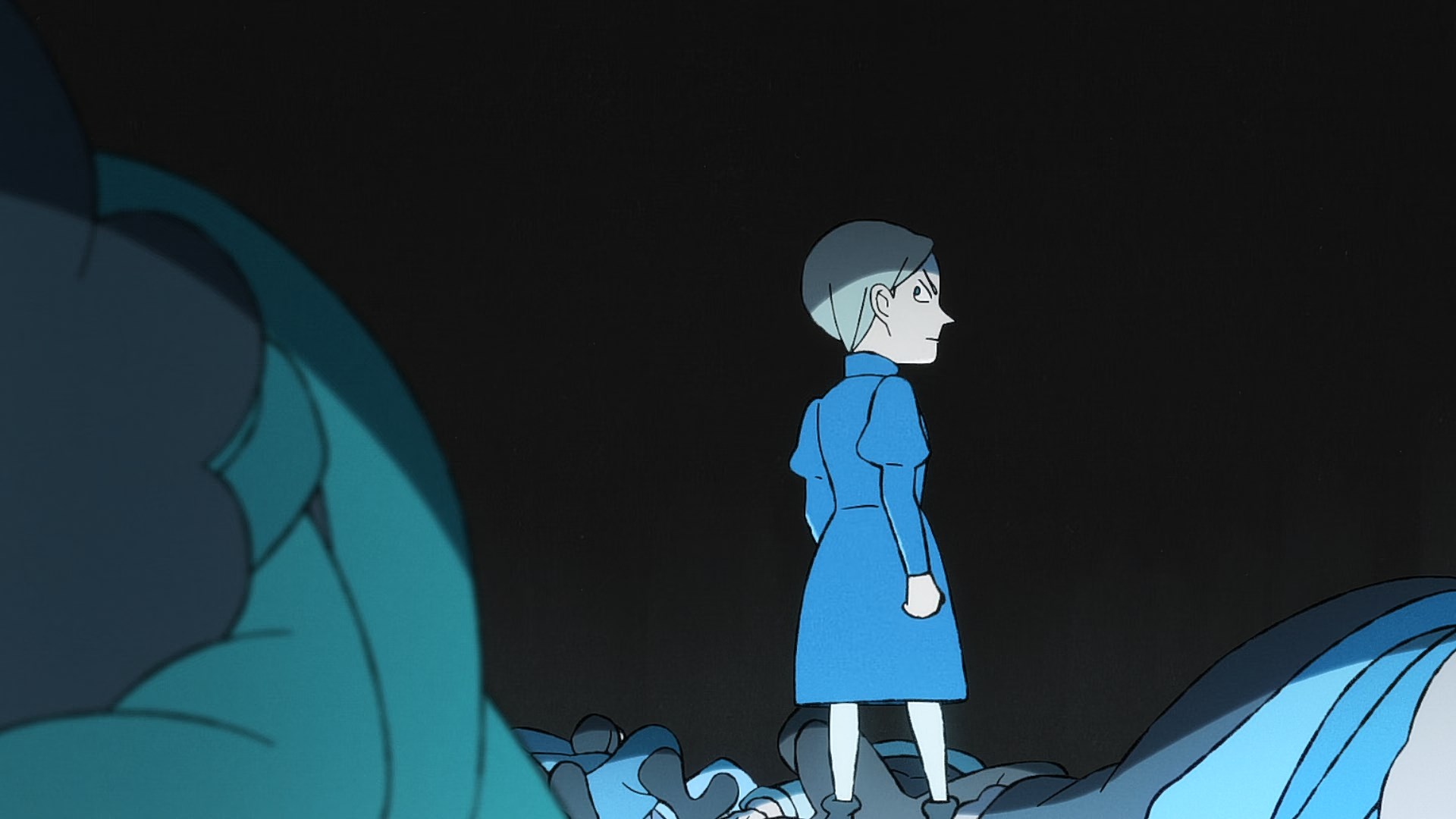 He makes short work of his foes and soon the girl is saved. He asks for her name and the girl says she is Miranjo and thanks him for his assistance. Before leaving Miranjo senses that Daida is related to Bosse by his scent. This sudden and unusual comment startles Daida and when she tries to leave, he presses her to stay promising that he will protect her and get her out of this prison. These words seem to have a profound effect as not only is this Miranjo taken in by this promise but even the mood of the mirror Miranjo feels those words also. 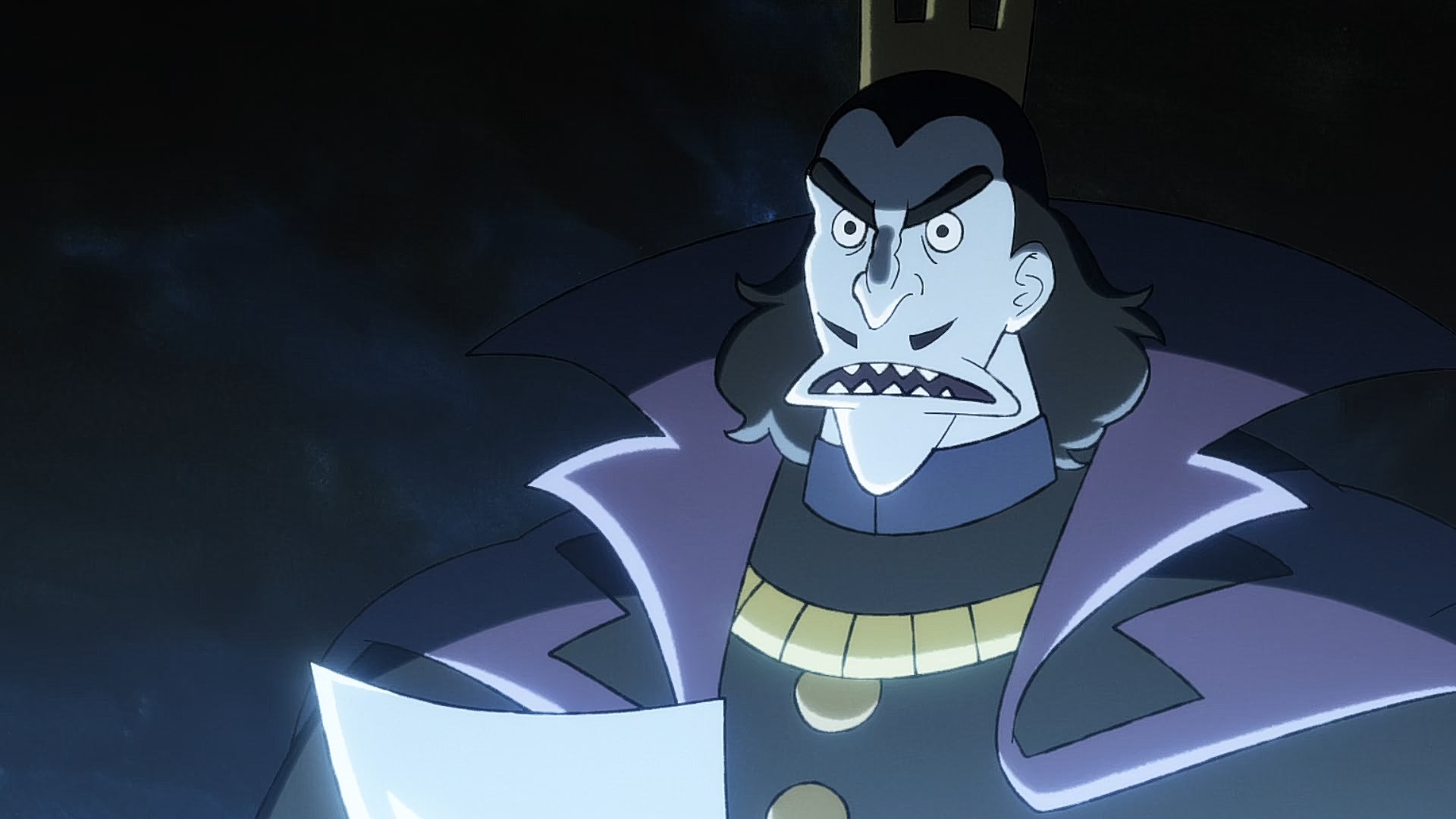 In the next scene King Desha holds a piece of parchment and is troubled by its contents. He is troubled, so much so, that he makes a beeline for a prisoner cell and much to his horror the prisoner has escaped, seemingly from thin air! He reads the situation immediately seeing this as a conspiracy of sorts which has used a hidden power, previously forbidden. He knows that this "Sword King of the Underworld", should he reach the surface will spell disaster. He calls for the captain to get this situation under control.

Meanwhile, Hokuro and Domas are going through some pretty gruelling training and it is not long before Hokuro is spent. Domas is disappointed at his feeble display and reminds him that they must only enter the underworld after a certain event has occurred. He is at loss in understanding what that event can mean and is confused over Bosse’s ambiguous orders and even speculates that he may be hiding something.


Things do not sit still for Miranjo either as she is in another realm trying to secure another powerful fiend to replace the one lost earlier. She tests this monster on Apeas who is quickly overwhelmed and just before the monster can lay the mortal blow, she commands it to stop. Lady Miranjo finally reveals her face and the resemblance is unmistakeable. 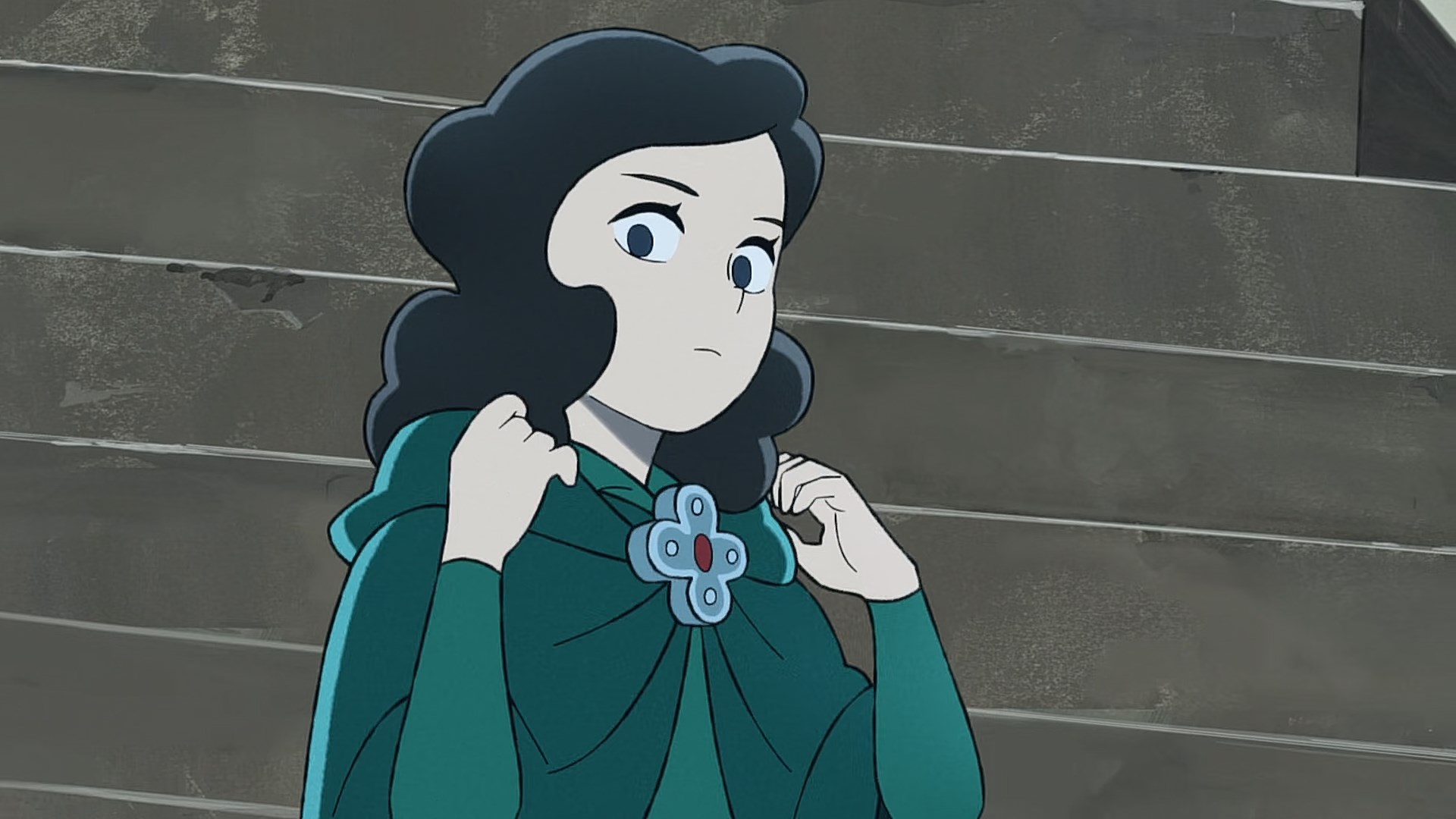 Things go back to Desha who has now assembled a small force and briefs them on the danger of this criminal group that is now on the run. The criminals are to be captured but Desha also highlights that the Kingdom of Bosse is on the brink of a civil war and this attack, coupled by the ensuing confusion, could be the perfect opportunity to usurp the throne from Bosse. The force despatches and it is not long before they meet Bojji and Kage who are pumped after an encouraging pep talk from Despa.

Despa encourages the pair to ride on with them saying this would be the quickest means of getting back to his kingdom. The group make good time but it is clear the foes Bojji and this squad face will be formidable. The group reach the castle at the same time as Hiling and Dorshe but it is too late to stop the attack as it would seem all of the criminals have surrounded Bosse in the throne room! 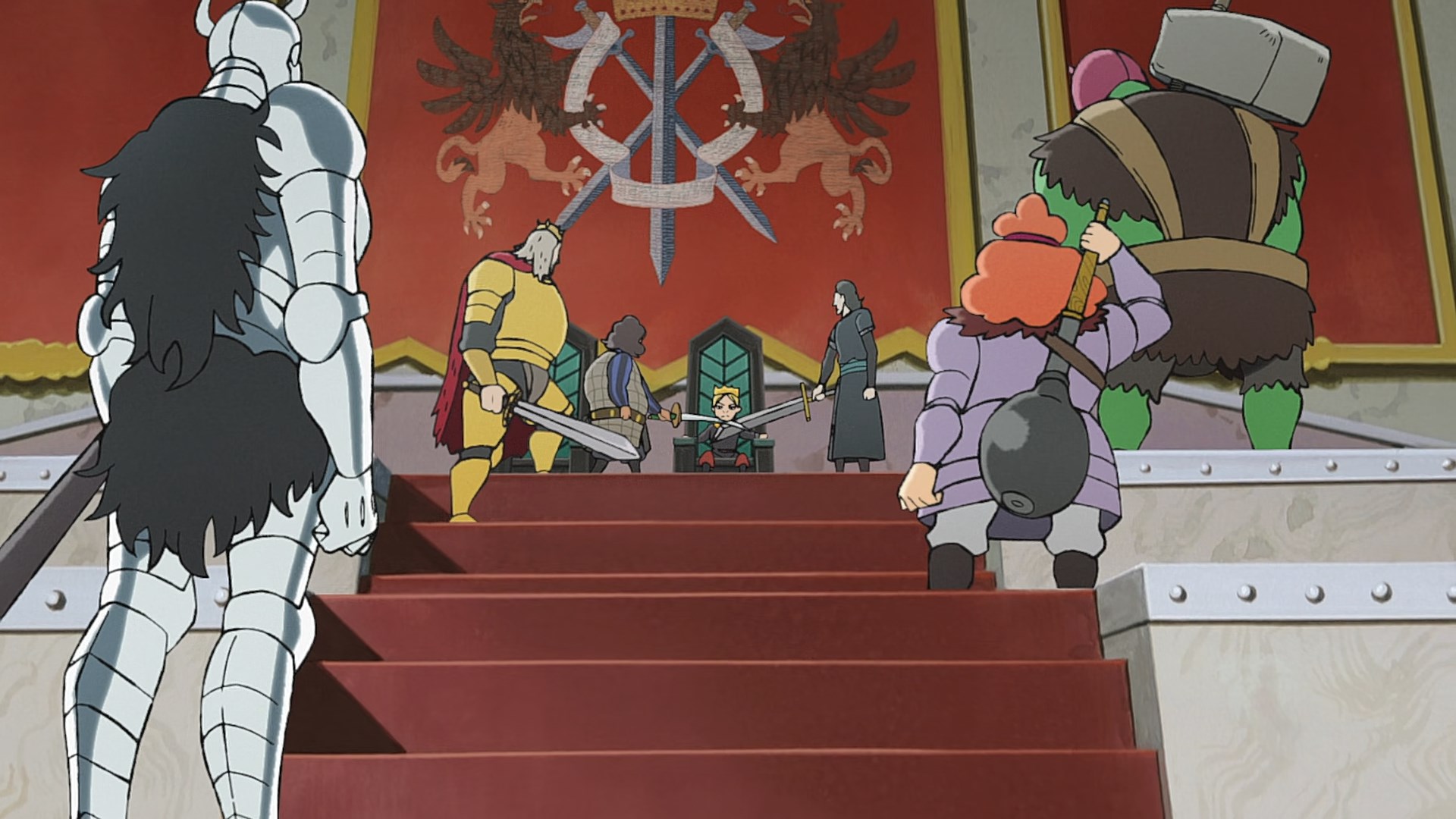 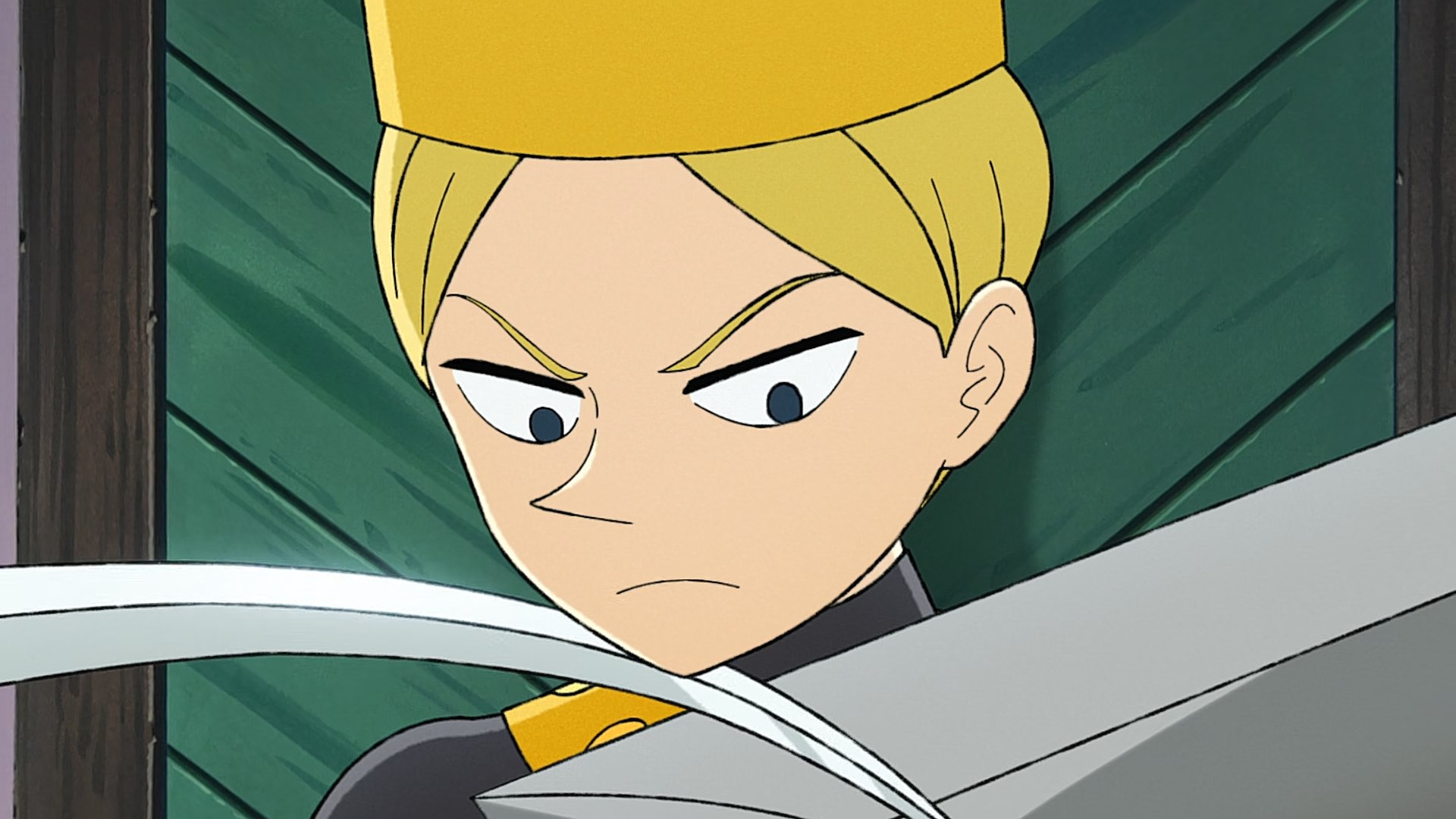 Thoughts: Got a bit of everything here with some good character insights and then a second half that was largely plot driven. A large part of the episode sees some further development in Daida as it becomes increasingly apparent, he has developed a greater sense of empathy and understanding of Bojji’s plight. Instead of this sense of superiority we get a more grounded Daida who could well revert back to his old supportive brotherly role as seen in the beginning of the episode. What is also noteworthy is the first hints of Miranjo’s troubled past which will surely come into play later in the series.

The second half lays the groundwork for further action and drama with all the major forces congregating at one point with a natural cliff-hanger. Another solid episode and this series seems to be going from strength to strength.
Click to expand...