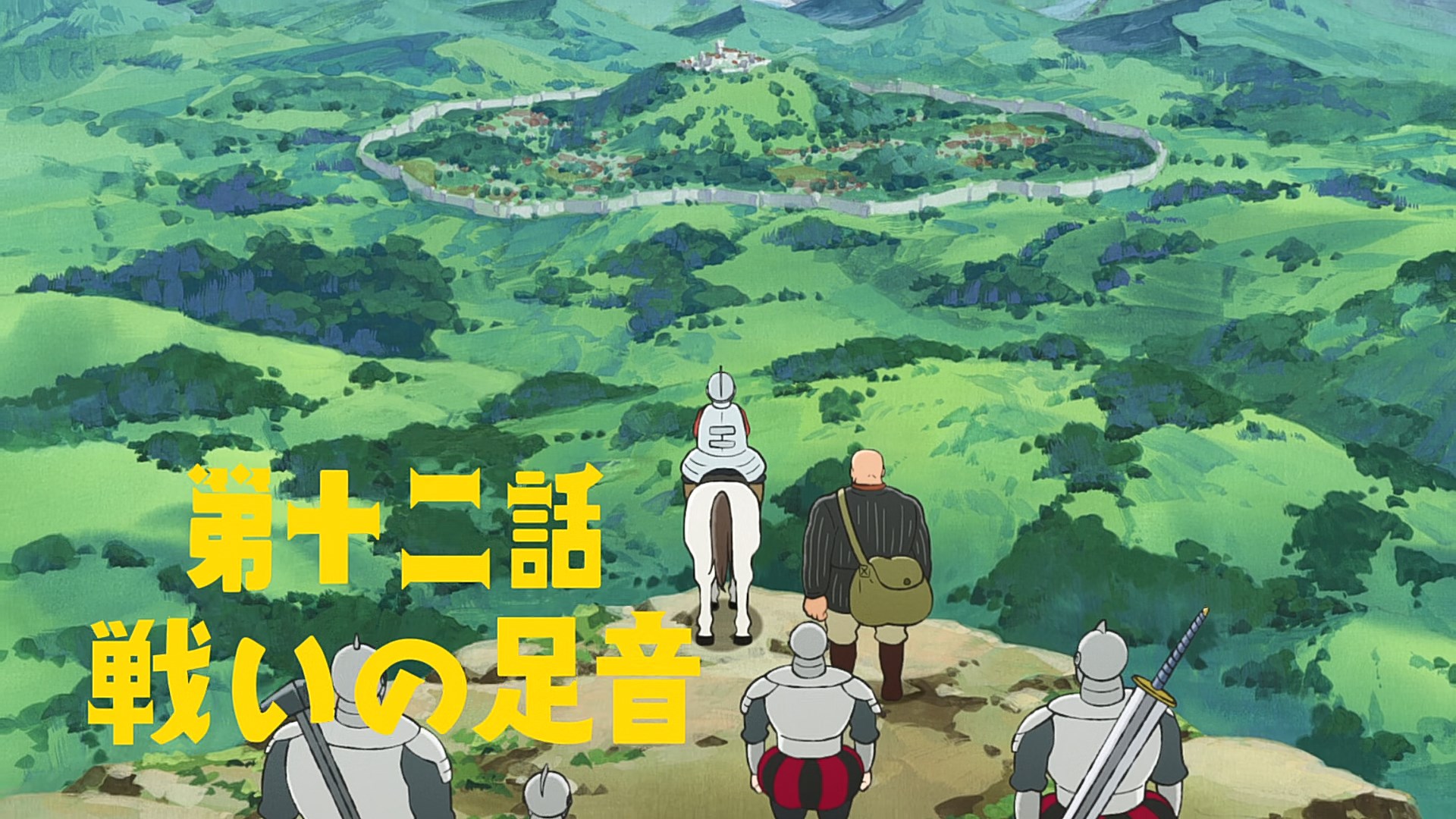 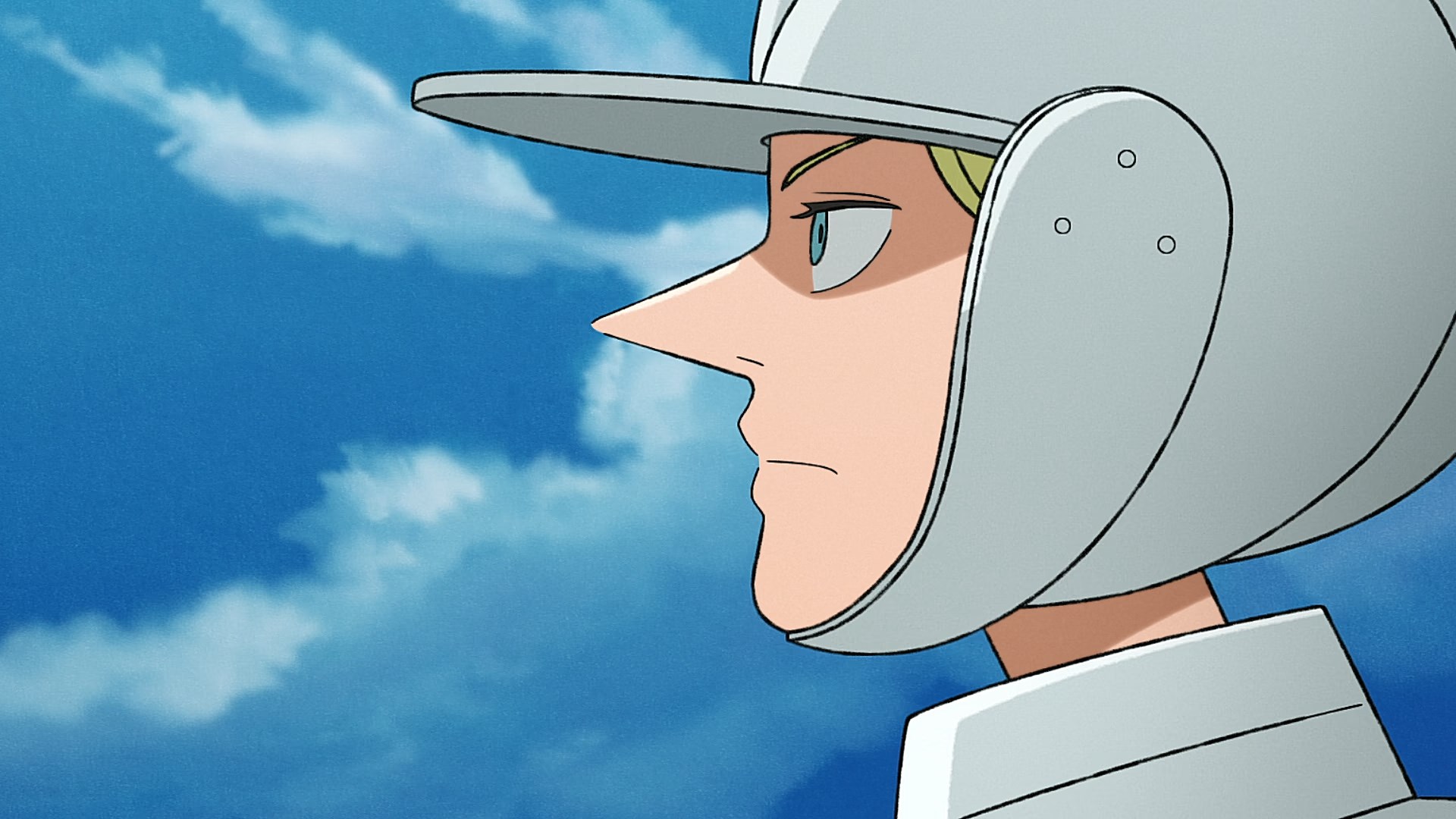 After a 5-minute recap for the entire series we finally get back to speed with Hiling looking nervously at the castle on the horizon that holds Daida. Will she be able to save him from the ambush that has befallen him?

Meanwhile, Bojji and Kage, who are companied by Desha’s small force, are closer to the action trying to make haste in catching this gang of dangerous criminals that are currently holding Daida hostage. Kage drops the question we are probably all thinking about and that is who is motivating these unknown criminals to act in unison in bringing down Daida? Who would want to bring down the kingdom and for what purpose?

We don’t have to ponder such questions for long as we see the gang walking through a long hallway with Miranjo leading the way. It would seem like she wants chaos to ensue but as for her motivation it is left decidingly ambiguous with only her saying the rewards will come later. Whatever that means. Still surprised by this revelation it is not long before there is another stunner! 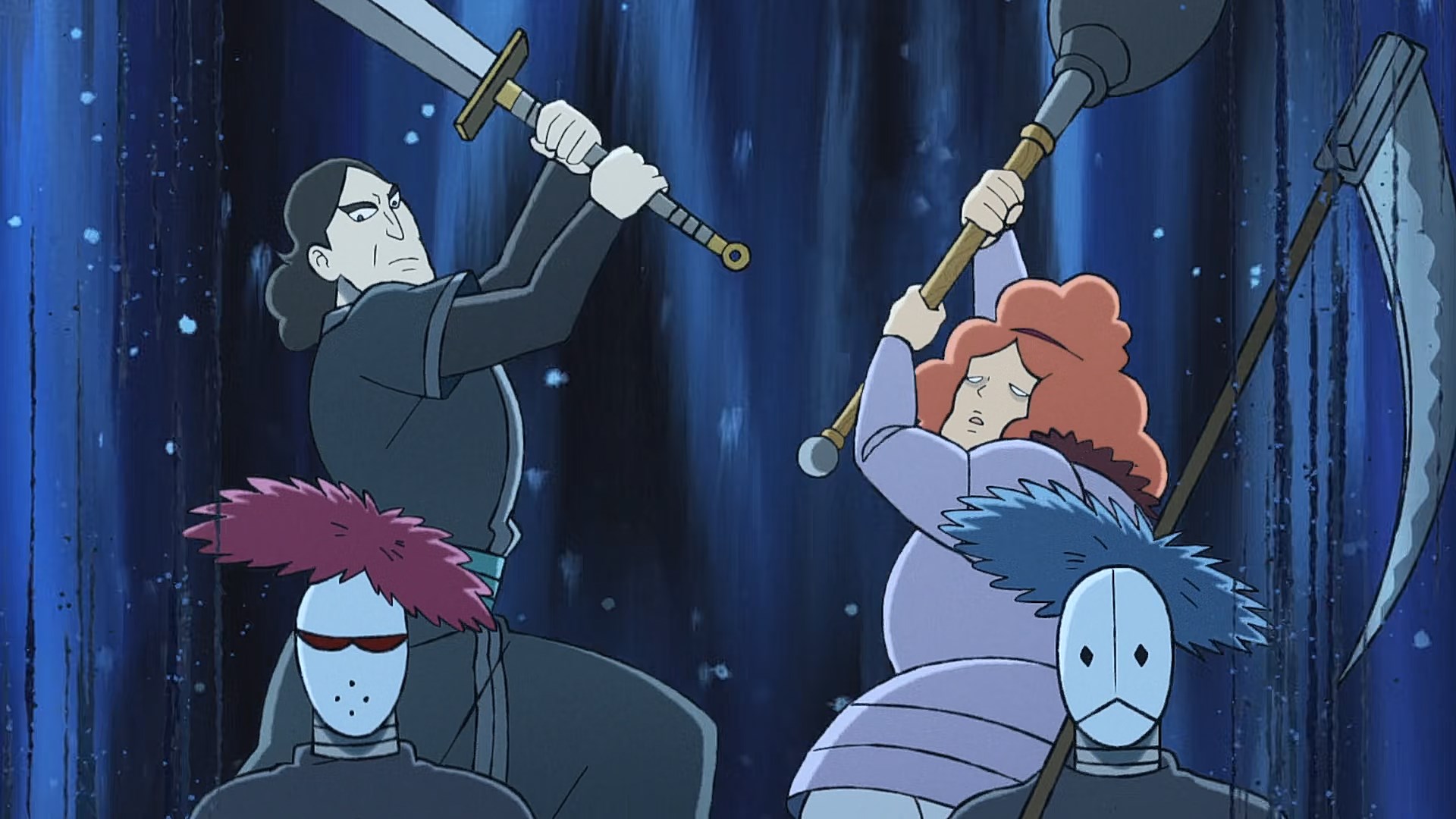 It would seem like the rug was pulled from right under her as not only is Miranjo whacked but her puppets also lay motionless on the floor. Stunned for a moment, Apeas charges to seek vengeance but is stopped by Miranjo who reassures him she cannot be harmed. It is at the very moment when one of the criminals gets second thoughts on betraying her as he fears the very statues and monsters could attack them should they be trapped in this room. An uneasy truth is reached and the criminals lower their weapons. Apeas is still on edge and is only put at ease when Miranjo commands him.

Bojji and Kage are reassured that Prince Despa will join them in their battle but due to some horse “trouble” will be delayed as for some reason Despa decides to ride his favourite stead despite the horse being woefully out of shape. I suppose, judging the size of this beast Despa might show up in a week or perhaps whenever it is convenient for the plot! 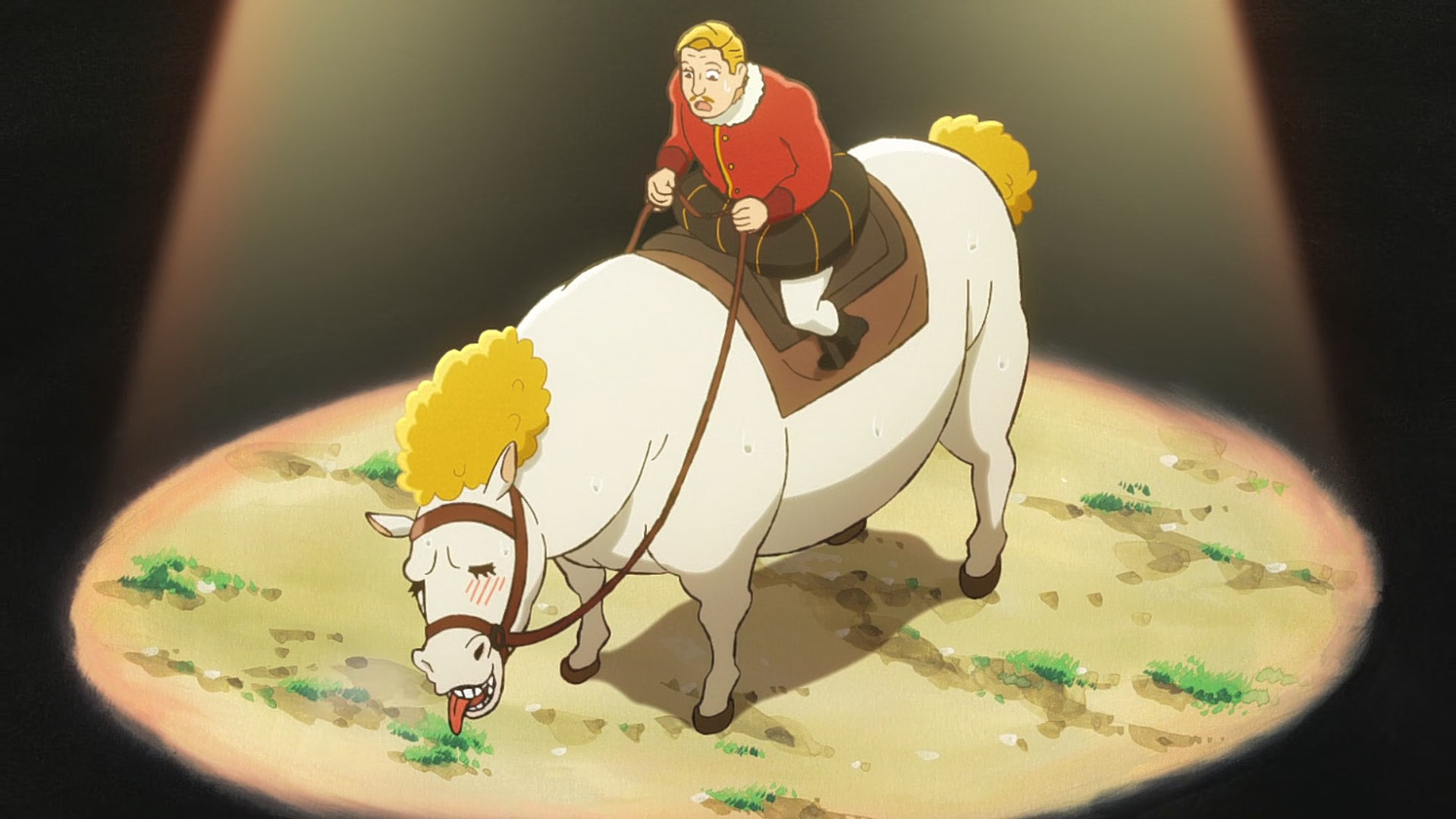 It is the big moment, the moment we were waiting for in over two weeks as we finally get to see what happens after the cliffhanger of episode 11. Despite the big predicament Daida/Bosse seems to be in his demeanour is remarkably calm. He is kicked and knocked on the floor with the crown falling helplessly of his head. One of the crew named Kingbo picks it up and immediately declares himself king and in his first act whacks one of his comrades who dares to sit on the throne! The other guy isn’t having any of it and walks towards Kingbo but can only tremble and cower in fear when seeing him eye to eye. He retreats, catching his breath, much to the amusement of everyone. But this act was all a ruse for he simply comes back and casts a spell on Kingbo who is held still before being stabbed multiple times. 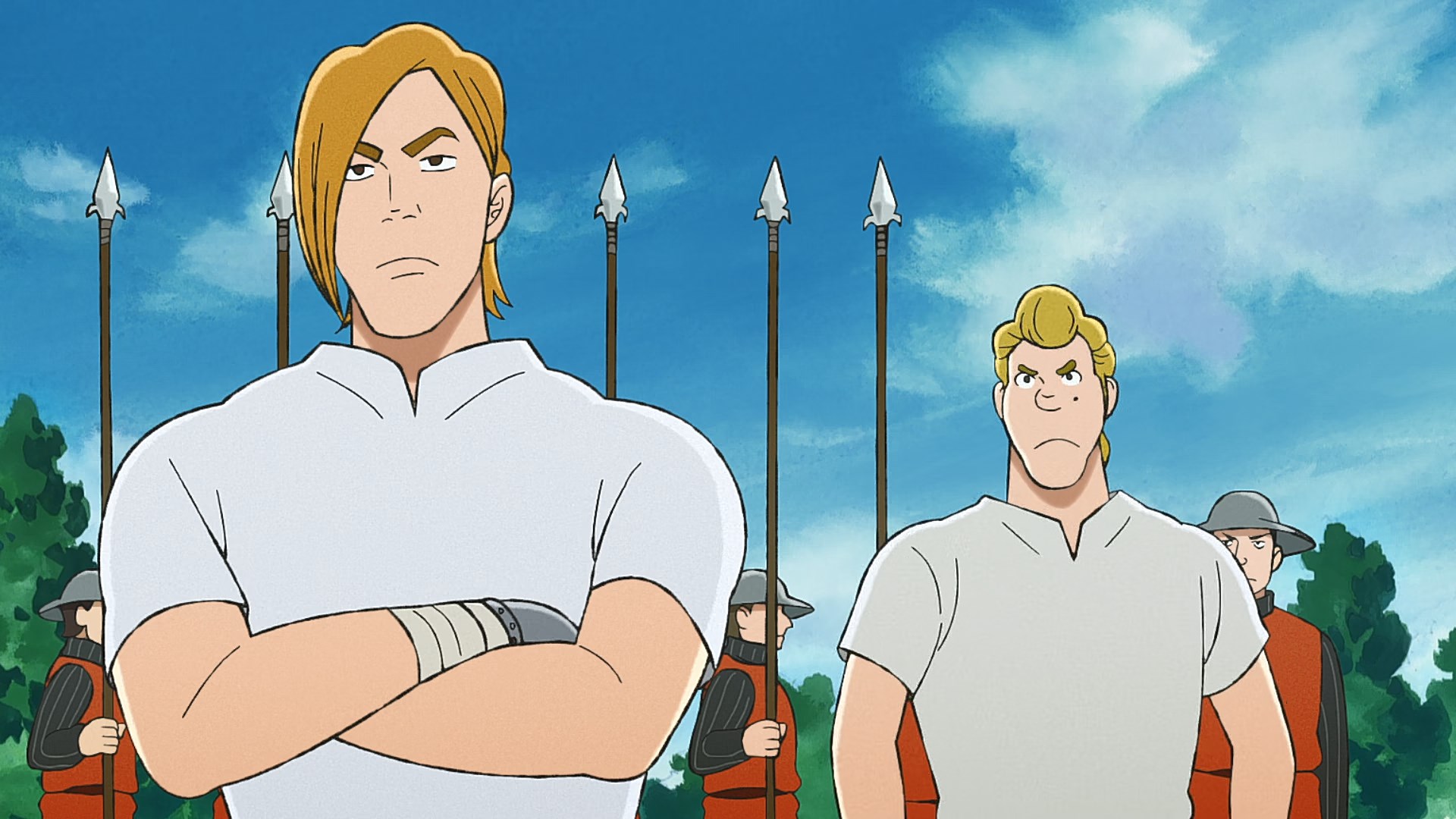 Kingbo bleeds profusely and as the others watch amazed at this sudden new power. The man struggles in agony and is filled with regret before expiring. It is a stunning role reversal and a reveal of the true power this mysterious fellow wields. How will Boijji or other any person topples this man with these great powers? A mystery indeed that makes me think that the someone with the wits of Despa maybe needed after all.

Master Domas has a similar vantage point of the castle as Hiling did earlier and muses what Bosse said earlier has come to fruition. He is well aware of the dangers and knows the fight is beyond the abilities of a much beefed up Hokuro. Still, despite his weakness Domas entrusts Hokuro to take part in some capacity offering him an oversized crossbow to dispatch some foes.

It is Hiling’s crew who are caught in the action first though as Dorshe is faced once more with the same beasts that almost brought him down only a few episodes ago. Apeas shows his face and Dorshe immediately accuses him of treachery only for Miranjo to interject taking full responsibility for the events that are about to transpire. Dorshe is shocked believing that Miranjo had perished sometime ago during the war. Hiling only watches on getting a sense of déjà vu at seeing the mirrored form of Miranjo.

Thoughts: The opening of this episode had me very concerned I was in for a recap episode which would have been especially annoying after a two week hiatus. Fortunately, that was not the case as the story did carry on although if truth be told not enough happened in this episode to satisfy me. We got an introduction of sorts to this rag tag group of criminals who despite being united on single purpose (the reasons still shrouded in mystery) clearly have their own goals and motivations. Will the crew end up at each other throats? It seems that they were on the brink at certain moments and it seems this will happen at some point.

The biggest reveal though came from Miranjo herself as she finally begins to lay out her cards making it clear to all she is after total destruction of the kingdom all over her resentment for Bosse. Is this the ultimate lovers tiff or is there something else? Whatever it is her moves don’t seem to be entirely unanticipated as it would seem Bosse has plans of his own that will surely come into action very shortly. What twists and turns will we expect in the coming episodes?
Click to expand...