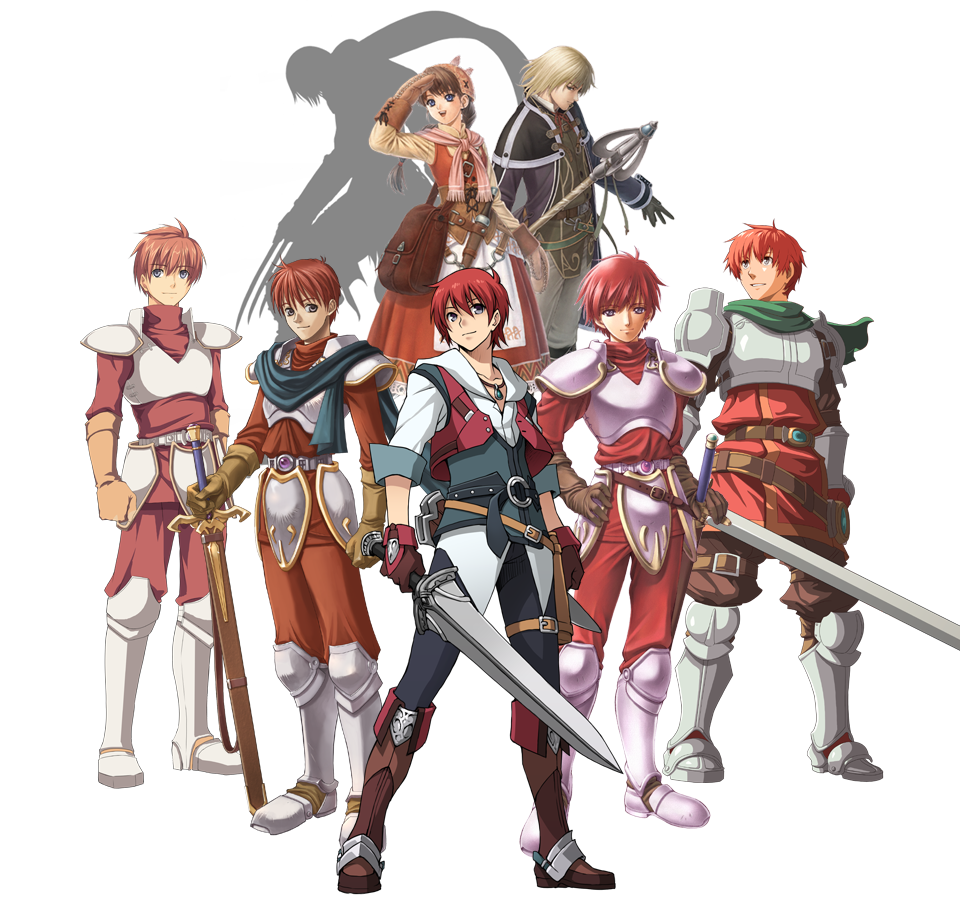 For those not in the know the Ys series (pronouced east) is one of the main franchises made by the Japanese game company Falcon (the other major franchises Legend of Heros and Trails series) the latter of which I may delve further into. Excluding the remakes there have been 9 Ys games. In game chronology the order is Ys Origins, Ys 1 and 2, Ys Memories of Celceta, Ys Oath of Felghana, Ys Ark of Napishtim, Ys VIII, Ys Seven and then finally Ys IX.

The games follow the adventures of Adol (and usually his buddy Dogi) who travels to different lands to seek adventure and treasure. Most games are self contained stories meaning it is not strictly neccesary to play games in order as only basic nods are made to previous games so do not worry about having to go on a mad marathon to catch up. All the games are action rpgs but they do have distinct battle mechanics. For example Ys 1 and 2 use bump mechanics while Ys Origins, Oath of Felghana and Ark of Napishtim utilise a battle system that more closely resembles action combat. The final four games: Ys Seven, Memories of Celceta, Ys VIII and Ys IX deploy party based action combat. I can't speak for all the games as I have only played three games in this series (those are Memories of Celceta, Ys VIII and Ys IX) but all these games are enjoyable. Any how I would recommend playing those games and will post some reviews of these games.
Confused about the monsta review scores? Then check them out with the link here!

If you only include the remakes then Ys Memories of Celceta is the 7th installment in the Ys franchise but in terms of chronology it is placed third with the events in this game taking place after Ys I+II but before the Oath of Felghana. For the purposes of this review, I will be evaluating the PS4 version of the game.

The story is decent, nothing ground breaking but manages to keep you engage through. The game does apply some standard tropes such as amnesia but this is explained and the pacing is decent starting low key but becoming increasingly epic as the story goes along. One notable thing that is missing that was later included in later iterations was the inclusion of an epilogue as the story does leave a few loose endings and it would be nicer to get more of a resolution over the main characters and what Adol does not next.

Speaking of main characters, I would say that whilst the chemistry of the main party members is good and the characters likeable the main weakness, I saw in this game were the antagonists. This was particularly true of the secondary villains who to me seemed to be bad for the sake of being bad with very little backdrop to explain their actions and motivations. Even the main villain seemed rather lacking when compared to the antagonists of more recent Ys games. Saying all that whilst I have been somewhat negative about the main villains do not mistake this for the game having a weak plot nevermind a weak game. This is an action rpg after all and the main factor in deciding if this game is any good or not are the battle mechanics and general gameplay.

On this note like most Ys games it does score highly on that note. In Celceta the game follows the same play style as its most recent predecessor of Ys Seven which used a party based combat system. You control one character at a time but can change AI on the fly to maximise combat efficiency. The AI are decent for the most part and will not let you down even on the higher difficulties. There are not a lot of commands you can give, it is simply evade or attack but this is more than enough and I did not find this lacking. Controls are fluid and you can perform special attacks as well the most powerful move called extra.

This game also utilises a flash guard system as seen in Ys Seven whereby if you time your guard just before you are attacked then you can parry the attack, avoid damage, and get the chance to land criticals for a limited period of time. Like most Ys games getting this mechanic done consistently is key to defeating bosses particularly in the harder difficulties. The same mechanics also apply to the new flash move mechanic which is like the flash guard move is done by executing the evade button just before the enemy hits you. Again, like flash guard you do gain a bonus for executing this move where the enemy moves in slow motion making it easier to land addition attacks or if you are really skilled to apply a flash guard to do double damage whilst the enemy is in slow motion. These moves, plus the specials really do make the combat entertaining, satisfying and keep you engaged throughout the game (and beyond)!

The main issues in terms of gameplay are the balancing issues that exist with combat; for example, the ranged character Karna does seem rather over powered as she can hit as well as the melee characters but does not suffer from any weakness as seen in other iterations of Ys. For Adol lovers out there he is powerful as ever and will be one of your strongest if not the strongest character in the party (unlike Ys IX).

Going beyond combat mechanics there are some minor gripes, at least in terms of navigation where it can be rather awkward to transverse the island, that is until getting an item. I think they should have been addressed and did make travel slightly irritating. The other bug bear, especially if you are a completionist like me, is that map completion, chests and resource points are not broken down for each area requiring you to meticulously explore each area if you want to get the relevant trophies. Also, if you want to get all the items be prepared to go through the game twice. These, in the grand scheme of things, are only minor shortcomings and should put you off the game. I would recommend playing the game. Another notable plus is the soundtrack, like most Falcon games, is good and they do get you in the mood most notably the In the fire of ignition track. That song always got me in the mood for boss fights!


Story 7 – Decent story but when compared to newer Falcon games in the Kiseki and even Ys series is weaker but it is still good. It would have been better if the antagonists were fleshed out more

Gameplay 8.5 – Good gameplay let down by minor balancing issues and navigation issues. I also imagine this is one of the easier Ys games so if you are a hardcore player who only plays on inferno setting you may not be satisfied with the challenge at hand.

Graphics 5 – This game is almost 10 years old and graphics are not Falcom’s strong suit either. Don’t expect great graphics here. If you demand breathtaking graphics then this game ain’t for you.

Overall 8 – Good game I would easily recommend if you are into action rpgs or a fan of Ys. If you are unsure if action rpgs are your thing then I would recommend trying Ys VIII or Persona 5 Strikers that are stronger candidates to the action rpg genre.
Last edited: Jun 14, 2021
Confused about the monsta review scores? Then check them out with the link here!

Retired
@monsta666 Dude I never knew you were into Nihon Falcom games! Awesome!

Retired
Nice, nice! What Falcom games have you played?
Confused about the monsta review scores? Then check them out with the link here!

Staff member
Fansub TV Team
Nice to see a review of this spring up, Celceta has been in my backlog for years, I plan on finishing off the TG-16 version before I finish the modern remake. One day after my Japanese levels up a bit I'll go back and play the PS2 version- even as bad as that particular remake is, it rocks the music like the rest of the series. I'm really hard pressed to think of a time Falcom didn't have an awesome soundtrack in their games.

I'm still surprised at the fact there are four wildly different versions of this game now. Ys book 1&2 has had so many remakes and ports, but virtually none of them change the game as much as any one version of Ys 4 does.

Retired
Seems like all the Falcom fans are coming out the woodwork! XD Celceta is a good game but if you wish to play a Ys game I would recommend playing Ys VIII. It is stronger than Celceta in almost every measure (not that Celceta is a bad game) and to me is like peak Ys. If you are strapped for time then go for that title first and then try the others.

If you have played the older Ys titles I would encourage you to put a review or even just an opinion on it. My plan is to play Ys Seven next and maybe then try Ys Origins. Btw guys have any of you play the trails series?
Confused about the monsta review scores? Then check them out with the link here!

Fansub TV Team
I really should try it out once some stuff on my end is done and dusted. But I do wonder, is it me who is wanting to play that or is it Monsta being the puppet master behind this...this guy has too much influence over me these days I swear.
"The best and most beautiful things in the world cannot be seen or even touched - they must be felt with the heart."
Helen Keller

monsta666 said:
Nice, nice! What Falcom games have you played?
Click to expand...

Currently playing through TItS 1 atm. On and off though so it's taking a while.
Last edited: Jun 19, 2021
You must log in or register to reply here.